This past weekend I went on a massive movie binge! Because I've been so busy with my day job, I had fallen behind in my movie watching. So I went to the Camera 12 in Downtown San Jose and saw FIVE films on Saturday! The first film I saw the crime thriller GANGSTER SQUAD. After that I went and saw Arnold Schwarzenegger's big comeback starring vehicle THE LAST STAND. Now judging from the trailer, I had a feeling that this was going to be bad. After watching it, my first suspensions were correct. 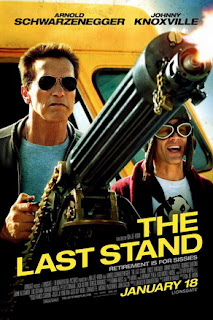 Here's what the film is all about. Sheriff Owens (Schwarzenegger) is a former LAPD officer now posted to the sleepy, crime-free border town of Sommerton Junction. But after a spectacular escape from an FBI prisoner convoy, the most notorious, wanted drug kingpin in the hemisphere is headed his way, with Sheriff Owens and the whole of U.S. law enforcement making a last stand to intercept him before he slips across the border forever.

So, instead of doing my usual movie critique, I thought it would be more educational (and fun) to list what was so bad about the film.

1) Arnold Schwarzenegger looks old in the film. Really, really old. Why you ask? Because he IS REALLY, REALLY OLD!!
2) Arnold's old, wrinkly, leather looking skin looks scary as hell in hi-def.
3) What the hell is Forest Whitaker doing in this movie?!? The man is an Academy Award winner and has appeared in Oscar worthy films such as THE LAST KING OF SCOTLAND. Forest, what the hell, man? Where you bored? Did you do it for the money?
4) The entire script was written on the back of a Bazooka Joe bubblegum wrapper.
5) Director Kim Jee-Woon has made some astounding films such as A TALE OF TWO SISTERS (a personal favorite of mine), THE GOOD, THE BAD, AND THE WEIRD and the underrated I SAW THE DEVIL. Those films were incredible! This movie sucked!
6) Did I mention that Arnold looked really, really old?
7) Why in the hell is Johnny Knoxville on the movie poster?!? Are you trying to tell me that Forest Whitaker is not worthy to be on the poster but Johnny Knoxville is?!? What idiot thought of that?!?
8) Yeah, Forest Whitaker was bored.
9) The only good thing about the film was the ending.
10) The credits were more entertaining than the actual film.
11) Yeah, Forest Whitaker did it for the money
12) I think I died a little inside from watching the movie.

THE LAST STAND is just a really, really bad movie. And not in a good way. It's just bad. Folks, let this be a lesson to you. If someone asks if you want to see this film, just say no! And then haul ass in the other direction! 1 out of 5 stars! Avoid at all costs!!


THE LAST STAND is currently playing at select theaters nationwide, including at the Camera Cinemas here in the Bay Area. To view showtimes, visit their website at www.cameracinemas.com.

Thanks for reading, and enjoy the show!
Posted by Philip Castor at 9:37 PM