So my very first film of 2013 just happened to be a horror movie and I was very excited about this. If this is your first time reading my reviews, let me reiterate something that I have said many, many times prior: I LOVE HORROR MOVIES! I grew up watching these films, I have books about them, I have them on DVD and Blu-Ray, etc. So I made my way over to the Century 20 Theater in Oakridge Mall to see TEXAS CHAINSAW 3D, the latest entry in the TEXAS CHAINSAW MASSACRE franchise. 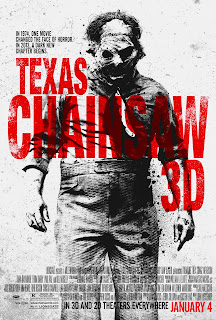 The film picks up where Tobe Hooper's 1974 original masterpiece left off; in fact several scenes from the first film are used in the opening credits to illustrate to the audience what happened the rest of the day after Sally (Marilyn Burns) escaped. Right when the opening credits end, the film begins as we see a vigilante mob of enraged locals surrounding the Sawyer house, burning it to the ground and killing every last member of the family (look for a cameo by genre actor Bill Mosley as Drayton Sawyer). Standing by is Sheriff Hooper (Thom Barry), who is outnumbered, overpowered, and unable to prevent this from happening.

Decades later a young girl named Heather Miller (Alexandra Daddario) discovers that she was adopted after she learns that she has inherited a Texas estate from her grandmother Verna Sawyer (Marilyn Burns once again). She decides to bring her boyfriend Ryan (Tremaine Neverson), and two other friends, Nikki (Tania Raymonde) and Kenny (Keram Malicki-Sánchez) along on the road trip to check out her inheritance. Upon arriving, Heather discovers that she has inherited a Southern mansion, however she is unaware of the terror that lurk in the basement below, namely her long, lost cousin Leatherface (Dan Yeager).

So before I get into my critique of the film, there are some interesting background and behind the scenes information that you should know about, especially if you are a fan of the series. First off is that in 2007, Platinum Dunes (Michael Bay's company that relaunched the series in 2003) announced that the company would not be producing a third film for the franchise. In October 2009, it was announced that Twisted Pictures and Lions Gate Entertainment were attempting to purchase the rights to the franchise, with Twisted Pictures producing and Lions Gate distributing. They negotiated a multi-picture deal with Bob Kuhn and Kim Henkel, who own the rights to the series. Lions Gate announced that it would be now partnering with Nu Image to produce the next film, and that John Luessenhop (LOCKDOWN, TAKERS) would direct the film. Producer Carl Mazzocone also announced that the story will pick up where Tobe Hooper's original film left off. Now that you're all caught up, please allow me to go on a rant for a bit. And this is directed solely towards the filmmakers of TEXAS CHAINSAW 3D.

So now I'm supposed to ignore all of the other films and just pretend they didn't exist because this film is now being touted by you guys as "the official sequel" because it picks up where Hooper's original left off? And I'm also supposed to forget about the remake and its prequel as well? Let me explain something to you all. By doing this, you are dismissing and ignoring all of the contributions that these talented filmmakers did for this franchise. In fact, by doing so, you are spitting on all their hard work, their blood, sweat, and tears that they have put into the legacy of Leatherface and his films. Tobe Hooper's astounding THE TEXAS CHAINSAW MASSACRE PART 2 is a brilliant film that commented on the mentality of greed that was predominate throughout the 80s Regan-era America. LEATHERFACE: THE TEXAS CHAINSAW MASSACRE III was directed by the talented Jeff Burr, who had a helluva time making the film on schedule and then having to deal with the MPAA to get his film rated and shown. TEXAS CHAINSAW MASSACRE: THE NEXT GENERATION boasts early film appearances by Renée Zellweger and Matthew McConaughey, who both turned in great performances in the film. For my generation, these three films helped add to the legacy of the series and helped turn Leatherface into a horror icon on par with his peers such as Michael Myers, Jason Voorhees, and Freddy Krueger.

At the dawn of the new millennium, it looked like Leatherface was all but forgotten. However all that changed with 2003's THE TEXAS CHAINSAW MASSACRE remake. Directed by Marcus Nispel and produced by Michael Bay, the remake was first met with controversy among horror fans, but it nonetheless was a huge commercial success. Plus it was the highest grossing film of the entire franchise! It reinvigorated the series and it reintroduced Leatherface into the 21st century and to a whole new generation of kids who had never seen the original movie. The film's boxoffice success was responsible for starting the trend of remakes of 70s/80s horror films that continues to this very day. The 2006 prequel, THE TEXAS CHAINSAW MASSACRE: THE BEGINNING was a flawed film to say the least, but the tone of the movie works very well and actress Jordana Brewster was great in it.

In my opinion, all these talented people that worked in front of and behind the camera deserve more respect than this. Maybe I'm getting all worked up for nothing. Maybe I'm reading too much into this, but I feel like we, the horror fans, and the TCM fans, are being insulted, along with all those who made all the previous films that I mentioned. But like I said, that's how I see it and that's how I feel about all of this.

So now that I've had my say, let me tell you all what I thought about the film.

The film itself did absolutely nothing for me. The story was flat and added nothing new, all the characters were two dimensional and were about as deep as a child's waiting pool, and every single scare in it was predicable as well as recycled. There's someone being strung up on a meat hook, there's someone being chainsawed in half, and the ever popular body popping out of the icebox. Seen it!

Now there is something that I would like to point out that I noticed in the film, and it's a major continuity error. So if the beginning of the film takes place on the same day as the first film, logic dictates that it takes place in 1974. But when we skip forward and the audience is first introduced to Heather, she looks to be about 23 years-old. So my question is this: shouldn't Heather be about 40 years-old and not 23? Also, when she in the interrogation room at the police station and she begins to look through a box that contained all the files and newspaper articles about the burning of the Sawyer house, the date on the newspaper simply says, "August 18th." So now I assume that since there's no year, and since Heather is so young, we are now lead to believe that the events did not take place in 1974, but now it all happened sometime in the late 1980's? Now who was the idiot that thought of that? I'm sorry but I don't think even Sherlock Holmes could figure out this continuity mess!

The only redeeming aspect of the film was that the special effects were done by the great KNB EFX, so at least the death scenes were gory and bloody. Also Alexandra Daddario's acting was decent in the film. Now I've seen her in other films like THE BABYSITTERS, PERCY JACKSON AND THE OLYMPIANS: THE LIGHTENING THIEF, and HALL PASS. She is a talented and very beautiful actress, but as to why she signed on to appear in this film I have no idea.

Oh I almost forgot, the 3D effects were atrocious and only made the film even more hideous looking than it already was. As I write this review, the film grossed $23 million dollars during its opening weekend. I'm sorry to admit that I helped contributed to that.

Even though we're only a few days into the new year, TEXAS CHAINSAW 3D gets my vote as worst movie of 2013! The film doesn't bring anything new; in fact the only thing it did do was officially kill the franchise! So it is with heavy heart that I say goodbye to Leatherface. It's been swell knowing you! 1 out of 5 stars!! Avoid with extreme prejudice!!


TEXAS CHAINSAW 3D is currently playing in theaters nationwide, including the Century Theaters here in the Bay Area. To view showtimes, visit their website at http://cinemark.com.

Thanks for reading, and enjoy the show!
Posted by Philip Castor at 11:35 PM