The fourth film I saw on Saturday over at the Camera 12 was the politically incorrect, toilet humored, foul mouthed, insensitive, offensive, raunchy comedy MOVIE 43. Now, I've seen the trailer for this film numerous times, and I was really hoping that it would be all it hyped itself to be. After viewing it, I found it to be mildly amusing. 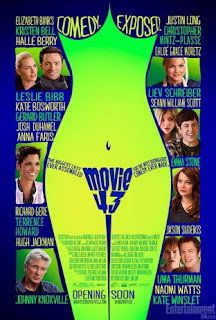 The film's official synopsis: A series of interconnected short films follows a washed-up producer as he pitches hilarious and insane story lines featuring some of the biggest stars in Hollywood.

According to Farrelly the film, "was made over four years, and they just had to wait for a year or two years for different actors. They would shoot for a week, and shut down for several months. Same thing with the directors. It was the type of movie you could come back to."

1) Hugh Jackman having testicles dangling from his neck. That was pretty funny.
2) Naomi Watts as Samantha attempts to de-virginize her homeschooled son. I'm sorry but if Naomi Watts was my mom, I would have sex with her too!
3) Chris Pratt being hit by a car and crap exploding out everywhere! That was gross but pretty humorous.
4) The "iBabe" cutting off young boys' fingers and penises. *insert chuckle here*
5) The "Superhero Speed Dating" segment was overall pretty funny. I liked that sketch.
6) Hallie Berry with HUGE FAKE BREASTS!! Not bad.
7) Seeing an animated cat named Beezel masturbating to pictures of his owner Josh Duhamel. Funny.

So that's about it. Oh and MOVIE 43 wasn't really all that funny. Like I said, it had its moments but between those moments there was a bunch of crap that wasn't funny. Just watch the Red Band trailer for the film. It's a lot funnier than the movie itself! 2 out of 5 stars! It's a rental at best!


MOVIE 43 is currently playing at select theaters nationwide, including at the Camera Cinemas here in the Bay Area. To view showtimes, visit their website at www.cameracinemas.com.

Thanks for reading, and enjoy the show!
Posted by Philip Castor at 10:34 PM