For the fifth and final film I saw on Saturday, I made my way across the street to the Camera 3 to see HYDE PARK ON HUDSON, the latest film by director Roger Michell of NOTTING HILL, VENUS, and MORNING GLORY fame. 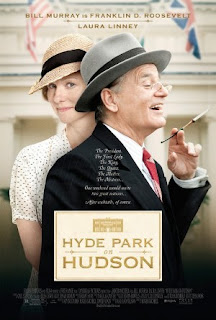 The film's synopsis is as follows: The weekend in 1939 when the King George VI (Samuel West) and Queen Consort Elizabeth (Olivia Colman) of England visited President Roosevelt (Bill Murray) in upstate New York, is told through the eyes of Roosevelt's distant cousin and lover, Margaret "Daisy" Stuckley (Laura Linney). The first visit to the U.S. ever made by a British monarch took place only months before the beginning of World War II, and commenced the budding "special relationship" between England and the U.S.

The film is based on Margaret Suckley’s private journals and diaries discovered after her death; about her love affair with and intimate details about President Roosevelt. Now there have been numerous allocations stating that the film took several extreme liberties with these historical facts. Also some complained that the film made FDR look like a philanderer.

The film does showcase some great acting. West's stuttering King George is the same one found in THE KING'S SPEECH, and does a great job of bringing depth and vulnerability to the role. Linney's Daisy is the impediment of innocence and naiveté. Her character could very well represent the innocence and naiveté of America at that time. In 1939, the United States had not yet entered World War II, and were somewhat unaware of the severe damage that the Germans were raging over Europe. Daisy is sweet, kind, and a loving individual, unaware of President Roosevelt's wandering eyes and other wandering parts. When she learns the truth about her president, her whole world comes crashing down, shattering the illusion of her perfect world.

Bill Murray does a fine job in the film portraying Franklin D. Roosevelt, however I couldn't get pass the notion that I was watching Bill Murray. I mean, I grew up watching him on the old Saturday Night Live, and seeing him in films like MEATBALLS, STRIPES, GHOST BUSTERS, and GROUNDHOG DAY. I saw him only as a comedic actor; that is until director Sophia Coppola cast him in her 2003 indie hit film LOST IN TRANSLATION. That film transformed the comedic Murray into an arthouse actor, appearing in films such as THE LIFE AQUATIC WITH STEVE ZISSOU, BROKEN FLOWERS, THE DARJEELING LIMITED and last year's MOONRISE KINGDOM. As I stated, I couldn't get pass the "That's Bill Murray" notion. In my eyes, he didn't disappear in the FDR role the way Daniel Day Lewis disappeared in LINCOLN.

Overall, HYDE PARK ON HUDSON is a fairly enjoyable film with some laughs and genuine emotions. It's worth a look if you are interested in the love affairs of our 32nd President of the United States. Good acting, solid directing equals an pleasant film. 3 out of 5 stars!!


HYDE PARK ON HUDSON is currently playing at select theaters nationwide, including at the Camera Cinemas here in the Bay Area. To view showtimes, visit their website at www.cameracinemas.com.

Thanks for reading, and enjoy the show!
Posted by Philip Castor at 10:27 PM