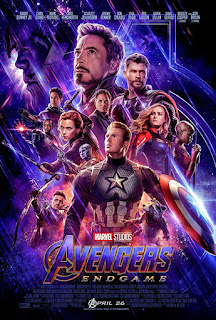 On Tuesday, April 29, 2008, I attended a special advance screening of Marvel Studios' first feature film IRON MAN, starring  Robert Downey Jr., Gwyneth Paltrow, Jeff Bridges and directed by Jon Favreau. It was on this day that I witnessed the birth of the Marvel Cinematic Universe. Eleven years and twenty-one films later, I found myself at the Cinelux Almaden Café & Lounge to watch the final chapter of what Marvel Studios head honcho Kevin Feige has called "The Infinity Saga." I suddenly realized just how fast time goes, as I have seen every single MCU installment in the cinemas. And here I was, eagerly awaiting the closure of what has become one of the most important chapters in my cinematic experience, and it did not disappoint. It goes without saying that AVENGERS: ENDGAME will go down as one of the important and entertaining films of all time!

The film's official synopsis: The grave course of events set in motion by Thanos that wiped out half the universe and fractured the Avengers ranks compels the remaining Avengers to take one final stand in Marvel Studios' grand conclusion to twenty-two films, AVENGERS: ENDGAME.

I'm not going to spoil the film here in my review. Instead, I'm just going to issue the following statement: THIS WAS THE BEST MCU FILM OF ALL TIME!!

As I write this post, the film has broken several cinema records. First, it broke the record Thursday Night screenings, earning an impressive $60 million, breaking the previous record held by STAR WARS: THE FORCE AWAKENS, which was $57 million total. On Friday, it grossed $305 million internationally, combined with Thursday Night's earnings for a staggering $365 million! As of Sunday morning, it has been reported that the film has now grossed globally an incredible $1.2 BILLION!! The breakdown from that is $350 million domestically and $859 internationally!! It now has become the first film in cinema history to surpass $1 billion in its opening weekend!! I seriously doubt that this record will be broken anytime soon!!

AVENGERS: ENDGAME is one of the most epic, satisfying, blockbuster and film of the year and a fitting conclusion to the Marvel Cinematic Universe that fans could ever wanted or hoped for!! It's also an end of an era, has this closes the chapter of the MCU, and is the beginning of the next phase that will entertain us with new characters, new adventures, and new films!! But before that, I would like to say "Thank You" to everyone who has been involved with the MCU and applaud you for all your hard work these past eleven years!! 5 out of 5 stars!! Highly recommended!!


AVENGERS: ENDGAME is currently playing in theaters in 2D, 3D, and IMAX nationwide, including at the Cinelux Theaters here in the Bay Area. To view showtimes, visit their website at www.cineluxtheatres.com.

Thanks for reading, and enjoy the show!
Posted by Philip Castor at 10:18 AM