Exploitation films hold a special place in my heart. The social norms of yesterday and what they thought was acceptable and what wasn’t tickles my funny bone. They were made fast and cheap, providing the sizzle to lure suckers into the theaters in hopes of seeing something naughty, racy, titilazing, or perhaps all three. Truth be told, some are good, some are bad, and some are just inept (more of those types of films later). Today’s trip down exploitation’s cinematic past come to us courtesy of Something Weird Video, The home of all things exploitation. Released in 1938, the film PAROLED FROM THE BIG HOUSE is a perfect example of the “its so bad it’s good” motto but provides audiences something amusing to watch and enjoy!

The film’s official synopsis: D.A. Milburn Stone is angry that the corrupt local parole board is recklessly releasing habitual criminals – like hitman Gunner Garson who callously mows down three people standing in front of a donut shop. Or conman “Slicker” Nixon who’s “the most dangerous of all because he has more brains than the average.” In fact, Slicker quickly reorganizes Gunner, pyromaniac Torchy, and other thugs into “a protective association” whose first attempt at strong-arming a local merchant ends with the man being shot dead. The merchant’s daughter, Pat Mallory (Jean Carmen), witnesses the murder and vows to get even. As Slicker’s fortunes rise, Pat sneaks into his home with a gun, almost gets caught, but is saved by rival racketeer “Red” Herron (George Eldredge of CAPTAIN VIDEO). She then goes to Slicker’s fancy new nightclub and is again saved by Red during a shootout. Taking a different approach, Pat next becomes a bathing-suit model in Slicker’s organization, but ends up being locked in a room with a sex maniac.

Back in the old days, exploitation films were either distributed to theaters or sold to specific territories. Hence, sometimes films were re-titled for different reasons. One of these reasons was if the distributor wanted to make more money off the film, they would re-title it and send it back out again. Another reason was if the theater wasn't making money from it, theaters would slap on a new, more profitable sounding title. It wasn't uncommon for audience members to see the same film twice.

Kendis was part of a group of independent exploitation producers and distributor known throughout the film industry as The Forty Thieves. These individuals turned their back on the newly created Production Code of Censorship (better known as the Hays Code) and made films "exploiting" every single rule that the Production Code forbid. Depictions of nudity, sex, violence, vice, drinking, drugs, abortions, and homosexuality were displayed proudly and repeatedly. While Hollywood was struggling to make a profit, these exploitation pioneers were profiting and prospering, and this was during the Great Depression and before the United States entered World War II.

Kendis produced several classic exploitation films, including GUILTY PARENTS (1934), GAMBLING WITH SOULS (1936), SECRETS OF A MODEL (1940), and ESCORT GIRL (1941) just for starters (and all of these films are available from Something Weird Video). Kendis died in Los Angeles on August 2, 1957 at the age of 70. Director Elmer Clifton worked with D.W. Griffith in a number of projects between 1913 and 1922, and even acted in his films THE BIRTH OF A NATION (1915) and INTOLERANCE (1916). His feature film debut was DOWN TO THE SEA IN SHIPS with Clara Bow in 1917. By the late 1920's his career was in decline, and found himself making movies for Poverty Row companies and lower-budget exploitation pictures, where he met Kendis. Clifton died on October 15, 1949 at 59 years old. Lead actress Jean Carmen appeared in several westerns, such as ARIZONA GUNFIGHTER (1937), THE PAINTED STALLION (1937) and BORN TO BATTLE (1935) before retiring to start her family. Carmen passed away on  August 26, 1993. She was 90 years old.

Something Weird Video was founded in 1990 by Mike Vraney, a former concert promoter who worked at several theaters during his teenage years. Named after the Herschell Gordon Lewis film, his Seattle based company would specialize in, "in releasing a rich array of low-grade trashy out-of-the-mainstream independent fare on both VHS and DVD alike that runs the gamut from horror features to softcore flicks to vintage classroom scare items to TV commercials to hardcore X-rated smut to theatrical trailers to collections of nudie loops and burlesque clips." He would go on to release the film libraries of some of the greatest exploitation filmmakers of all time, including Lewis, David F. Friedman, Harry H. Novak, Joseph W. Sarno, Doris Wishman, William Grefé, Bethel Buckalew and Barry Mahon. Unfortunately, Vraney died from lung cancer on January 2, 2014. He was only 56 years old. His wife Lisa Petrucci now runs the company and continues the legacy of her late, beloved husband.

PAROLED FROM THE BIG HOUSE is one of most goofiest, cheesiest, and hilariously bad exploitation films of all time! It's an absurdly weird and wonderfully awful movie! The fact that it still exists for all of us to watch in the 21st century is amazing, and it's all because of the wonderful people at Something Weird Video! It doesn't get any better than this, folks!! 4 out of 5 stars!! Recommended!! 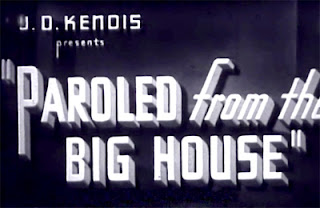 PAROLED FROM THE BIG HOUSE is available on DVD-R from Something Weird Video. To purchase a copy for yourself, please visit their website at www.somethingweird.com

Thanks for reading, and enjoy the show!
Posted by Philip Castor at 11:41 AM