During the 1960's, folk music played such an important role in the civil rights and anti-war movements that was transpiring then. Artist such as Bob Dylan, Joan Baez, Pete Seeger, and others were educating and enlightening young minds across the country about the social standards and questioning the government's role in the Vietnam War. However, there is one voice from that era that has been overlooked for far too long. With the release of PHIL OCHS: THERE BUT FOR FORTUNE, that mistake has been corrected. 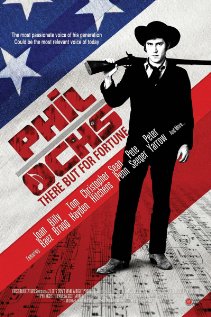 This informative documentary shows the life and times of Phil Ochs, one of the most important figures of the 1960's. He rose to fame in the early 1960’s during the height of the folk and protest song movement. His songs, with lyrics ripped straight from the daily news, spoke to those emboldened by the hopeful idealism of the day. Ochs himself believed to his core that he and his music could change the world for the better. From protesting the Vietnam War to supporting striking miners, from his attacks on sitting Presidents to mocking the politically disinterested, he struck at the heart of both the Right and Left wing political establishment with precisely targeted musical satire and righteous indignation.


Possessed by the American fantasy and dream he saw projected on the Hollywood screen, Phil Ochs fought for the bright lights of fame and for social justice in equal measure. In the end it was this defining contradiction that would eventually tear him apart. While he never gained the widespread attention he so desperately wanted, his solo shows and his radical politics would generate the kind of controversy that only a true star could attract.
By 1968, the mood of the country had changed. With the death of Martin Luther King Jr. and Bobby Kennedy and the events of the Democratic National Convention in Chicago, all that seemed possible just a few years earlier began to fade and Phil Ochs took this hopelessness to heart as if the failings of the movement were his own. His mental and physical health declined as he sank deep into depression and alcoholism. He took his own life in 1976 at the age of 35.
By the time of his death the FBI had a dossier on him that was over 400 pages long. They would argue that he had no respect for government policies and stood against his country in a time of war. Weaving together photos, film clips, historic live performances and interviews with an array of people influenced by Ochs; from Sean Penn to Pete Seeger, Joan Baez to Tom Hayden, “Phil Ochs: There But For Fortune” paints a very different picture. We are able to understand that Ochs’ lasting legacy in both music and politics ultimately mirrored the complexities and contradictions of the country he loved -- and his life, sadly, reflects the arc of the times in which he lived.
PHIL OCHS: THERE BUT FOR FORTUNE reveals the biography of a conflicted truth seeking troubadour who, with a guitar in hand, stood up for what he believed in and challenged us all to do the same. Unyielding in his political principals and unbending in his artistic vision, Phil Ochs, though branded a traitor by his critics, was above all a fiercely patriotic American. This is his story.
Thanks for reading, and enjoy the show!
Posted by Philip Castor at 1:53 PM