Tonight's film review is a tough one ladies and gentlemen. Now usually whenever I see a really bad film, I take a page out of my favorite television show MYSTERY SCIENCE THEATRE 3000. Meaning I'll talk back to the movie, saying funny accidoents while escaping the ugly reality that I paid to see that movie. Now when I went to see RED RIDING HOOD this evening, I was rendered speechless. Which, by the way, doesn't really happen to me that often. 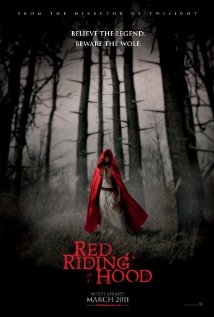 The film is about Valerie (Amanda Seyfried), a beautiful young woman who is torn between two men. She's madly in love with her childhood friend Peter (Shiloh Fernandez), unfortunately her parents are arranging her to marry the wealthy and utterly boring Henry (Max Irons). To escape her mundane fate, Valerie prepares to run away with Peter. However their plans are put on hold when they learn that Valerie's older sister has been killed by the werewolf that prowls the dark forest surrounding their village. Thirsty for revenge, the villagers summon famed werewolf hunter, Father Solomon (Gary Oldman), to help them kill the wolf. But Solomon's arrival only causes more problems as he warns that the wolf, who takes human form by day, could be any one of them. To make matters worse, the wolf has targeted Valerie as his next victim, but the creature knows who she is. Now she must figure out who is the werewolf before Solomon kills everyone in the village looking for it.


The most obvious targeted audience the film is trying to capture are fans of the TWILIGHT saga, which also helps thanks in large part to WB by snagging the director of the first film Catherine Hardwicke. And also like the TWILIGHT saga, there is love triangle here as well. How boring and unoriginal. If the werewolf were to kill all three of these annoying kids, then the film would be interesting. There are more red herrings in the film than in a episode of Scooby-Doo. Seyfried has the same wide-eyed, dowe look on her face throughout the film.  Fernandez does the same, with his trademark Gap Ad smirk and obvious gelled up hair style. I didn't know they had hair products in the Grim Fairytale world of yesteryear's. And I am not going to even try to explain the bizarre dance sequence from the film. There are some things that need to be left unsaid.


To make a long story short, I would rather have full frontal lobotomy than to view this film ever again. Sometimes I wonder how films like this ever get the green light for it to be made in the first place. RED RIDING HOOD is just awful. Just plain awful. Nothing needs to be said more. Now go and read the book. At least that is more entertaining

Thanks for reading, and enjoy the show!
Posted by Philip Castor at 10:28 PM