For over 17 years, the military’s “don’t ask, don’t tell” policy restricting openly gay, lesbian, and bisexual people from serving caused over 13,500 people to be discharged from the service. Many of these brave and closeted men and women fought in The Gulf Wars during that time frame, and some have died in combat to protect our rights and freedoms that many of us here have taken for granted. While the policy was recently abolished, there are thousands of stories of people who's lives were affected by its discriminating words. It is within this political climate that director Ned Farr’s A MARINE STORY tells one of those stories. 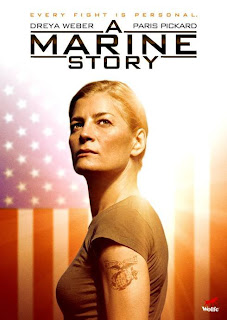 The film stars Dreya Weber as Alexandra Everett, a decorated Marine officer who was discharged when her sexuality became known. Returning to her hometown and trying to adjust to civilian life, she is immediately recruited to help out troubled teen Saffron Snow (Paris Pickard) to train for boot camp. All the while Alexandra also struggles with her sexuality and her role in society as a civilian. Eventually, the truth of why Alexandra was discharged is revealed and threatens her friendship with Saffron as well as with everyone in town.

Writer, editor, and director Farr made a name for himself with his first feature film THE GYMNAST, which also starred Weber in the lead role. That film garnered him acclaim and the film would go on to win 12 awards from festivals ranging from San Francisco’s Frameline Film Festival to L.A.’s Outfest.  Farr once again teams up Weber (who is also one of the producers) to tell a true story, one that has affected so many lives. Farr has written a beautiful, tight script that grips you from the very beginning and doesn’t let you go until the end credits roll. Strong performances by Weber and her co-star Pickard (who also co-producer) lift the story by infusing raw emotions and tenderness to their respected characters.

While it’s interesting to view Alexandra’s love and her wishing to return to the military, it is the military’s way of discharging Alexandra that is so alarming. It is this contradiction that really stops and makes you think. While it is known that many gays and lesbians are willing to die for their country (even though they still are denied their basic civil rights such as marriage), has anyone wondered just how absurd and behind the times the military’s mentality is? These people, who are treated like second-class citizens, love their country so much that they, just like their straight counterparts, are willing to make the ultimate sacrifice for us. Alexandra is just one of the many casualties that the “don’t ask, don’t tell” policy caused.

A MARINE STORY first debuted at L.A.’s Outfest in June 2010 and won both the Audience and Grand Jury awards and Weber also won Best Actress. Since then it has gone on to win sixteen awards at film festivals around the country. Just like THE GYMNAST, Farr once again crafted a film that transcends boundaries and blurs the line between gay and straight films. It is a film about human interest.

The film was recently released by San Jose based distributor Wolfe Video, but what makes this event even more important is that it is the very first Blu-Ray release for the company. The Hi-Def transfer looks flawless and crisp. The extras are the same as on their DVD release: behind the scene feature, director's commentary, deleted scenes, theatrical trailer, closed captioned, stereo 5.1 and 2.0, and 16x9 anamorphic widescreen.


We all know someone who is gay, lesbian, or bisexual. They might be someone in your family, or someone you go to school with. They might be a co-worker you’ve known for years, or your neighbors who you have BBQ’s with every holiday weekend. It doesn’t really matter who they choose to be with. What matters is are they a nice person? Are they are there to help you if you’re sick and they go get medicine for you? Will they lend you their hand in a crisis? They’re always be there when you need a friend, because they are your friends and you’re good friends with them as well. We all bleed red, white and blue. We are all Americans fighting for the same American Dream. For some reason though, the American Dream is a lot harder to achieve for some. A MARINE STORY reminds us that we all have the same right: to serve our country if we want to, and to fight, protect, and die for our country. But being gay shouldn’t interfere in showing how proud you are to be an American.

To purchase your copy of A MARINE STORY on Blu-Ray and DVD, visit http://www.wolfevideo.com/

Thanks for reading, and enjoy the show!
Posted by Philip Castor at 12:44 PM