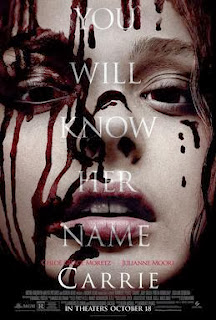 OK, now my reviews follow a specific formula. First I usually make a grand entrance in the first paragraph, then I give the film's official synopsis, talk about what I thought of the film, give some interesting trivia about it, and then my conclusion. That's my thing. I always to that. However, after seeing the remake of CARRIE, starring Chloë Grace Moretz and Julianne Moore, and directed by award winner Kimberly Peirce, I decided to forgo my usual M.O. and just cut to the chase.

There. I said it. Why didn't I like it? Did you see Gus Van Sant's remake of PSYCHO? Remember how much you hated it because it didn't bring anything new to the table and it was a complete waste of your time and was totally an unnecessary remake?

That's what I thought while I was watching this movie.

I liked the trailer best. It told the whole film under two and a half minutes. But all it was was just a rehash of the original and vastly superior film.  So stick with Brian de Palma's classic and don't even bother with seeing this one.


CARRIE is currently playing in theaters nationwide, including at the Camera Cinemas here in the Bay Area. To view showtimes, visit their website at www.cameracinemas.com.

Thanks for reading, and enjoy the show!
Posted by Philip Castor at 7:50 PM