Phil attends the RiffTrax Live! Broadcast of NIGHT OF THE LIVING DEAD at the Century 20 Oakridge Mall-October 25, 2013 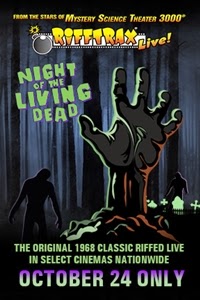 Hello again everybody! So this past Thursday night, I headed on over to the Cinemark Century 20 Theaters in Oakridge mall in south San Jose to attended the RiffTrax Live! broadcast of the 1968 George A. Romero horror classic NIGHT OF THE LIVING DEAD. To actually riff such a landmark film in the horror genre takes a lot of guts (pun intended), but remember these guys are professionals! If anybody could riff on the grandfather of zombie films, it would be the RiffTrax guys!

So if you don't know what a Rifftrax is, let me give you all a quick definition. According to their official website, Rifftrax "are comedic MP3 tracks that you play in-sync with your favorite movies. Written and performed by the stars of the award-winning TV series Mystery Science Theater 3000, RiffTrax brings the unique humor of "Satellite of Love" partners Michael J. Nelson, Kevin Murphy and Bill Corbett to Hollywood's hit movies."

They guys broadcast the event from the Belcourt Theatre in Nashville, Tennessee to hundreds of movie theaters across the country courtesy of the folks at Fathom Events. After some funny intros, they guys got down with doing what they do best!

NIGHT OF THE LIVING DEAD is one of the most revered and one of the most important horror films of the 20th Century. The movie is found in the Top Five most influential horror films and is considered the alpha and omega of the zombie genre. Directed by horror icon George Romero, the film spawned five sequels, numerous remakes, re-imagines, and parodies and homages.

Kevin, Bill, and Michael had no problem pointing out the faults of the film and riffing the hell outta them. It's funny, because of the film's legacy and how it's so beloved by horror fans, we fail to see some of the faults to be found within its frames. Luckily, the guys had the audience in stitches! Yes, the RiffTrax crew pulled no punches on the film, and had the us eating out of the palm of their hands! Making fun on a classic is by no means an easy task, but the guys managed to pull off the impossible, and made Halloween a little less scary in the process.

This was such an awesome RiffTrax Live! event! Now just in case you missed it, you're in luck! The gang will be back just in time for Christmas as the riff that awful holiday classic film SANTA CLAUS VS. THE MARTIANS! Tickets are now available for that event, which will take place on Thursday, December 5th at 7:30pm, so make that date on your calender!