Phil wants you to check out the new horror short film M IS FOR MISCARRIAGE for the ABC'S OF DEATH 2 contest-November 1, 2013 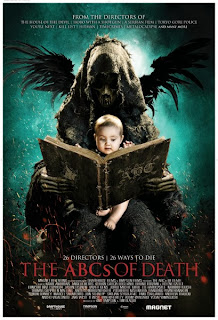 Hello again my fellow horror hounds! As you may or may not know, there was contest that was held just last month in search of the 26th director for the film ABCs OF DEATH 2, the next installment of the series. According to the official website:

"THE ABCs OF DEATH became one of the most talked about genre films of 2012/13. Hugely ambitious and immensely challenging, it was unlike anything fans had ever seen. Many loved it and a hell of a lot detested it - but the film was such a creative and financial success that Timpson Films, Drafthouse Films and Magnolia Pictures set forth on the creation of a sequel. The producers signed up 25 of the most exciting and innovative genre directors from around the globe... but there are 26 letters in the English alphabet - and once again, we find ourselves searching far and wide to find… THE 26TH DIRECTOR! One lucky winner will become the ABCs OF DEATH 2"s 26th director, receiving five thousand dollars cash and having their work included in the finished feature film alongside some of the world"s best talent. But even if you don't win, you could be discovered through this competition! Every submitted short will be featured on the ABCs OF DEATH 2 website to intrigue, sicken, terrify and crack up audiences across the globe. Also, a selection of the audience favorites will be included on the DVD/Bluray." 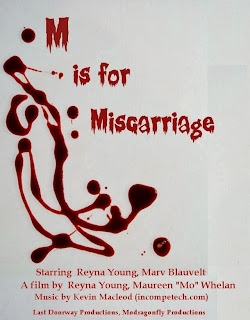 The contest has inspired many genre fans to create some truly amazing short films, which according to the rules must begin with the letter "M." Two of these talented people are Reyna Young (late TV horror hostess Miss Misery of Miss Misery's Movie Massacre) and Maureen "Mo" Whelan (director of the short film A SIN THAT CANNOT BE FORGIVEN).  Together, these ladies have made the surreal and horrifying film M IS FOR MISCARRIAGE. Pulling no punches, the film deals with one of the most devastating incidents that can ever happen to a woman who is pregnant.

The film deals with a very serious issue which will no doubt hit the viewer in the gut with the force of a sledgehammer. The film was written by Young, and both she a Whelan share directing duties. Young also acts in the short along with Marv Blauvelt. It's the first joint venture between Young's Last Doorway Productions and Whelan's Modragonfly Productions.

To watch the film, click on the link here and to vote for it, click on the "Like" button. Voting ends on November 14th so act now before time is up!


Horror fans are extremely excited about the latest installment of this new, promising horror anthology. Now you can make one inspiring horror filmmaker's dream a reality. So go vote now and help make horror film history!