Phil attends a special screening of INFINITY AND CHASHU RAMEN at the Camera 3 Downtown San Jose-Nov. 3, 3013 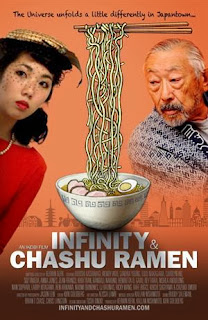 I am a big supporter of local indie films. It's so amazing to see people like you and me getting out their and telling their stories for all of us to enjoy. And this past Sunday I had the honor of once again see the great local film INFINITY AND CHASHU RAMEN at the Camera 3 in Downtown San Jose. To make the screening even more important, filmmaker Kerwin Berk and several of the actors were there to partake in a Q&A sessions and to sign autographs. The screening was sponsored by C.A.T.S., the Contemporary Asian Theater Scene. There were two screenings of the film: at 1pm and at 3:15pm. I attended the 1pm screening.

I had the privilege of seeing the film back in August at the inaugural CAAMFest Film Festival, which was held also at the Camera 3. In case you missed my review or it the first time around, here's what I wrote about the film:

This is a perfect example of the flourishing local independent movie scene here in the Bay Area. Berk really captures not only this independent spirit, but also captures the spirit of Japantown. The combination of a cleverly written script with very good acting makes this a winner in my book! The entire cast is great in the film! Both Woo and Kashiwagi play up the odd couple scenario perfectly, giving us some true laughs and sentiment. It's their on-screen chemistry that makes the film so much fun to watch. Definitely worth checking out!!"

After viewing the film again a couple of months later, it was wonderful to see the film play to a large audience! People were laughing at the funny parts and were somber at the serious parts. Overall, the screening was a complete success! 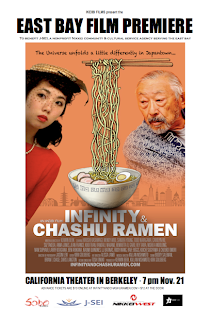 After the screening, Kerwin came out along with several cast members and conducted a very breif Q&A with the audience. Afterwards, we were all in the theater lobby, hanging out with each other, buying DVD copies of the film and getting autographs. I congratulated Kerwin on all his success and then I left on such a high note that I went back home and watched my DVD copy of the film.

Now if you're interested in seeing the film, you're in luck! There is one more screening left (and it might be its last theatrical screening ever) and it'll take place on November 21st at 7pm at the California Theater in Berkley. So make plans to see this homegrown, locally made indie classic!

To purchase tickets for this screening, click here to get them before the sell out! To purchase a DVD copy, visit the film's official website at http://infinityandchashuramen.com.

Thanks for reading, and enjoy the show!
Posted by Philip Castor at 5:32 PM