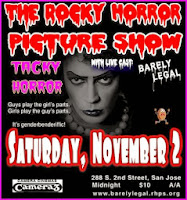 Yes friends, after many, many months away, I returned to the Camera 3 to once again partake in a midnight tradition. Saturday night was my triumphant return to the monthly midnight screening of THE ROCKY HORROR PICTURE SHOW, the ultimate cult classic and original midnight movie! And as always, my friends from Barely Legal Productions were there to bring the film to life! However, Saturday's show was no ordinary show, oh no! It was the first ever "Tacky Horror" show! The guys played the girl's parts and the girls played the guy's parts! Or as they BL crew called it, "It's genderbenderiffic!" The show was presented by The Camera 3 Cinemas and by Psycho Donuts as well!

The was a huge crowd for the event, and our host was the always magnificent Nate McHavoc, who informed that crowd that he and his wife, the lovely and sexy Bridgid McHavoc, were at their friend's wedding and had a lot of champagne (and in Nate's case some tequila as well). These contributing factors made his intro all the more fun! He had all the virgins come up and do the butt dance (there were quite a lot of virgins), and then sent everyone under 18 years old back to their seats. Those who remained had to answer a his traditional contest which involves taking a basket, "And putting it between your legs." Yup, that never gets old! After humiliating the virgins, it was time to meet our cast!

I'm not gonna lie, it was freaking hilarious to see cast dressed up in each other's clothes!! This was the first time that my friend Lizzie Bernard (who mostly portrays Magenta at the shows) made her debut as the one and only Dr. Frank-N-Furter and she was awesome!! She really played up her performance and rightfully so. Lizzie is so full of energy that you cannot contain it. So she really went for it and made it so much fun to watch!And to make it even more fun, Lizzie's mom and sister were in the audience. Whenever Lizzie made a funny face or did something sexually provocative, her mom just smiled and said, "That's my girl!"

Another worthy performance that night was by Christy Robinson Mila, who portrayed handyman Riff Raff (a role done my Nate) and she was spot on! He behavior, he mannerism, she was Riff Raff and she was excellent!

After the show was all over, I was talking with Bridgid and I mentioned that this should be an annual event. So, it looks like it'll be back again nest year! But in case you can't wait till then, there is one more "Tacky Horror" show and it'll take place Saturday, November 9th at the Albany Twin Landmark Theater. So make plans for that show! In the meantime, The Barely Legal gang will return to the Camera 3 on Saturday, December 7th!! So come out next time and join in on all this ROCKY HORROR fun! You'll be glad you did! To learn more about future shows, and how you can become a cast member, visit their website at barelylegal.rhps.org.

Thanks for reading, and enjoy the show!
Posted by Philip Castor at 4:12 PM