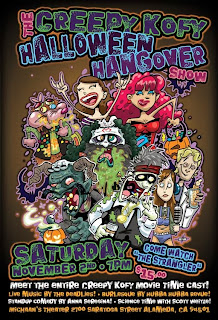 The San Francisco Bay Area has been the home to some truly unique and original local television shows that simply cannot be replicated or reproduced. Back in my youth, I grew up with the beloved KTVU Channel 2 show Creature Features, hosted by the late, great Bob Wilkins and the legendary John Stanley. These two individuals helped turn a whole generation of kids like myself into hardcore horror fans. When the show ended in 1984, there was a void that, for a very long period of time, was left unfilled. That all changed a couple of years ago when the KOFY TV20 station out in San Francisco unleashed upon an unsuspecting television audience Creepy KOFY Movie Time. Hosted by LIVE 105 deejay No Name and the demon called Balrok, the show features house band The Deadlies, the sexy Cave Girls, science wiz Dr. Scott Weitze, Webberly the Fact Rat, Slob, comedians, burlesque dancers, magicians, local bands, and other cool stuff while showing some of the best and worst horror films and trash pics of all times. Over the past couple of years they have made Saturday nights at 11pm a mandatory viewing. And this past Saturday night, they brought their show to the Michaan's Theater in Alameda for the first ever CREEPY KOFY HALLOWEEN HANGOVER SHOW! For this historic live event, they screened the 1964 stink bomb  crime thriller THE STRANGLER!

This was my first ever time visiting the Michaan's Theater and I have to say this was one beautiful looking theater. It's used to be the former Alameda Naval Air Station movie house out on Fort Mason. That night, the place was packed with CKMT fans, who where all dressed up in Halloween costumes (we CKMT fans celebrate Halloween all year round) and the energy level was high! Many friends of the show were there like the very cool folks from November Fire, who had lots of cool DVDs, posters, stickers, patches to sell. NF is owned and operated by the awesome couple Heather and Strephon Taylor. Also at the event were Jim Cravens Jr. and his fiance Catherine Benefield de Dood, the owners of the incredible Heroes and Villains Comics out in Pleasanton. And last, but certainly not least, the legendary John Stanley was in the house!

The show had everything that fans wanted and more. The Deadlies rocked the house with their sets! Jim Sweeny was there with three lovely burlesque dancers from the Hubba Hubba Revue! There was standup comedy by the very funny Anna Seregina! Also Dr. Scott was there with another informative Science Time! The Cave Girls looked fabulous and sexy as always!! And our hosts Balrok and No Name kicked ass always! And then, there was the movie!

THE STRANGLER is about a fat, lonely, fat, sweaty looking lab technician named Leo Kroll (Victor Buono) who has serious mommy issues and loves to collect dolls. He strangles several female nurses as a way to cope with his overbearing mother, who is sick in the hospital. While the police is trying to identify this mysterious serial killer is, Leo falls in love with a young girl named Tally Raymond (Davey Davison), who works at one of the amusement park booths where he wins his dolls. Things go from bad to worse for poor, sweaty Leo, and soon the police are hot on his trail, but not before he pays his sweet Tally a visit!

The film was inspired by the killings of the Boston Strangler, who made headlines during the early 1960s. However, after watching the movie, it's clear that director Burt Topper and screenwriter Bill S. Ballinger took inspiration from Alfred Hitchcock's 1960 masterpiece PSYCHO. It's all right there: and overbearing mother, a son with serious mommy issues, doesn't have great repoire with the ladies, a real loner, and likes his mother's clothing. Oh and he likes to kill too!

Actor Victor Buono appeared in a number of films such as WHAT EVER HAPPENED TO BABY JANE?, HUSH...HUSH, SWEET CHARLOTTE, and THE MAD BUTCHER. But he's really well known for his role of King Tut on the 1960's Batman television show. Davey Davison has appeared in a slew of daytime and regular television shows like Bonanza, Days of Our Lives, The F.B.I., The Virginian, Cannon, and The Streets of San Francisco to name a few.

What a night that was!! It was so much fun!! I got see all my friends again, saw some sexy ladies, heard some great music, took lots a pics, drank a few beers, and saw a bad movie! It was the perfect Saturday night! And speaking of Saturday nights, make sure you check out Creepy KOFY Movie Time at 11pm on KOFY TV20 on Channel 13 here in the Bay Area! It's a party for your TV!!

Thanks for reading, and enjoy the show!
Posted by Philip Castor at 8:38 PM