Phil sees BLUE IS THE WARMEST COLOR at the Camera 7 Pruneyard Campbell-November 9, 2013

The recently released foreign film BLUE IS THE WARMEST COLOR has been receiving a lot of controversy since its win at the Cannes film festival this May. Now with this in mind, I couldn't wait to see what the hoopla was all about. Now I thoroughly enjoy viewing foreign film because they are much more sophisticated and more mature; meaning their outlook on love, life, sex, and humor are treated with respect and splendor. So with all of this hype surrounding the film, I ventured over to the Camera 7 to see this latest French export. 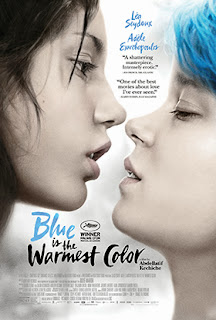 Based on the 2010 French graphic novel Le Bleu est une couleur chaude by Julie Maroh,the film has that look and energy of the French New Wave movement from the 1960s: filmed mostly hand held, shot on real locations, and portraying love and life as a celebration. This is something I believe that most American films lack: the spirit of human soul. The celebration of being alive and living in the moment.

Director Abdellatif Kechiche (he also wrote and produced the film) really crafted an amazing picture that really shows us that love knows no boundary and doesn't care if you're straight, gay, black, white, etc. Kechiche shot the film almost like a documentary, in that we see everything that happens to these two girls; the good, the bad, the beautiful, and the ugly.

Kudos goes to both Adele Exarchopoulos and Lea Seydoux for their award-winning performances as the two star-struck lovers. However, they go far beyond that, as they bare it all in one of the most passionate and explosive lesbian love scene that has ever been captured on film. Now I have seen my far share of queer love scenes, but this was just so graphic, raw, and realistic. I think the screen that I was watching it on began to melt because of the heat coming from the scene! It really was the most intense love scene I have ever witnessed.

So this is where the controversy comes in to play. Both lead actresses expressed disdain for Kechiche, saying they felt exploited during their love scene, complained about his behavior during the film's shooting and said that they would never work with him again. Several other crew members  accused him of "harassment, unpaid overtime and violations of labor laws." The film's been banned in several locations and theaters across the country.

Despite all this negativity, BLUE IS THE WARMEST COLOR is the most beautiful, breathtaking, poetic film about love that I have ever seen in my entire life! And let me just say this to those who only see the film as a lesbian/gay film: it is not a queer film. It's more than that simple definition. It's about your first love, and all the wonderment that comes with it. Who doesn't remember their first love? I still do and it still has the same affect on me now as it did when I was a young man. This is my pick for best movie of the year. So do yourself a favor and see this film while it's still playing in the theaters! 5 out of 5 stars!! Highly recommended!!


BLUE IS THE WARMEST COLOR is currently playing at select theaters nationwide, including the Camera Cinemas here in the Bay Area. To view showtimes, visit their website at www.cameracinemas.com.

Thanks for reading, and enjoy the show!
Posted by Philip Castor at 10:58 PM