Do hear that? The clouds are rolling in. The thunder is getting louder. The lightening more frequent. You know what all this means? That's right! The God Of Thunder has returned! So I headed over to the Camera 7 in the Pruneyard Campbell to check out the film THOR: THE DARK WORLD 3D, the sequel to the 2011 film and the eighth in Marvel's film universe. 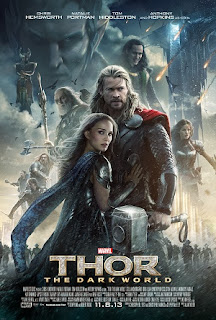 The film's official synopsis: Thor (Chris Hemsworth), the Mighty Avenger, battles to save Earth and all the Nine Realms from a shadowy enemy that predates the universe itself, and restore order across the cosmos ... but an ancient race led by the vengeful Malekith (Christopher Eccleston) returns to plunge the universe back into darkness. Faced with an enemy that even Odin (Anthony Hopkins) and Asgard cannot withstand, Thor must embark on his most perilous and personal journey yet, one that will reunite him with Jane Foster (Natalie Portman) and his devious brother Loki (Tom Hiddleston) and force him to sacrifice everything to save us all.

The film is not only a sequel, but a continuation from last year's mega blockbuster THE AVENGERS. Like IRON MAN 3, it's a continuation of the bigger picture, meaning like the comic books, whereas there's an incident that happens in one book, it gets referenced in another. Same goes for this movie as well. So the film is another chapter in the massive story of the Marvel Universe.

What's interesting about this film is it builds up its characters and fleshes them out more. Hemsworth's Thor is more relateable; expressing more of an array human emotions and is more a well rounded character than in the first film. Portman's Jane is the victim that needs saving, but she really doesn't play it up, especially at the end where she helps Thor out. Their romance is what brings out the humanity in Thor, and it's his love for Jane that will transform him throughout the film.

The villainous Malekith is a worthy adversary for Thor: ruthless, intelligent, and without mercy. Eccleston's acting is simply bone chilling! Here we have a perfect example of ultimate evil; one that spells complete doom for the Nine Realms and it's really an outstanding performance on Eccleston's part. And speaking of evil, Loki returns once again, but what side is he really on? Once again Hiddleston brings his "A Game" and gives us comic fans a character we love to hate. Or do we?

Alan Taylor steps in the director's chair, replacing Kenneth Branagh, who directed the first film. This is Taylor's third full length feature (his other two films are1995's PALOOKAVILLE and THE 2003 IFC film KILL THE POOR). He's mainly known for directing television shows, and he has directed many episodes for amazing shows such as Oz, Sex and the City, The Sorpranos, Mad Men, Nurse Jackie, and Game of Thrones. Here Taylor does a fine job of balancing big action scenes with emotional content. Since he's directed episodes of the aforementioned Game of Thrones, you can tell he's comfortable in directing big battle scenes and he does a great job at it! Plus he ups the ante and the stakes are even higher, which makes it a better film than the first.

As I mentioned earlier, I saw the film in 3D and it really looked spectacular! The action literally leaps off the screen and lands in your popcorn! Now it is also in 2D so if you get really bad headaches from 3D, then this version is for you. But if you can, see it in 3D! Also, since this a Marvel film, there is a bonus scene at the end. Actually, there are TWO bonus scenes: one after the main stars credit, and one after the actual credits end. The first bonus scene will no doubt cause many comic book fans to wet their pants.

THOR: THE DARK WORLD is a worthy follow up and is this fall's best action packed extravaganza! Fans of the Marvel Universe will have a blast at seeing this and don't worry, The Mighty Thor will return again in THE AVENGERS 2. In the meantime, catch this film before it's gone! 4 out of 5 stars! Recommended!!

THOR: THE DARK WORLD is currently playing in both 2D and 3D in theaters nationwide, including the Camera Cinemas here in the Bay Area. To view showtimes, visit their website at www.cameracinemas.com.

Thanks for reading, and enjoy the show!
Posted by Philip Castor at 2:15 PM