Phil attends the RiffTrax Live! Broadcast of SANTA CLAUS CONQUERS THE MARTINS at the CineArts Theater-December 5, 2013 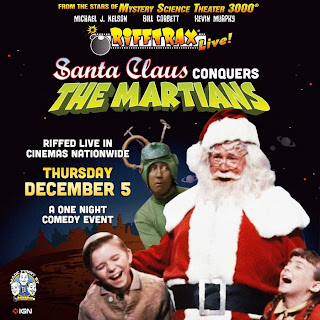 Happy Holidays everybody!! It's starting to get bit colder outside, days are shorter, and folks are busy shopping at the mall. What a better time to check out the latest RiffTrax Live! show over at the CineArts Theater over in Santana Row here in San Jose! To celebrate this festive season, they were riffing the sci-fi, holiday stink bomb SANTA CLAUS CONQUERS THE MARTINS . Now it was originally riffed on the old MST3K show back in the early 1990s, but this was an all-new riff! Accompanying me to the screening was my good friend (and longtime MST3K fan) Alison. After picking up some refreshments, we made our way to our seats and waited for the show to begin!

For those you don't know what a RiffTrax is, let me clue you in. According to their website, "RiffTrax are hilarious commentaries that you play along with a DVD, or are merged with movies and classic shorts that you can watch on-demand or on DVD. Written and performed by the stars of Mystery Science Theater 3000, RiffTrax features the unique humor of Michael J. Nelson, Kevin Murphy (Tom Servo) and Bill Corbett (Crow T. Robot)! We riff on Blockbuster Movies, Educational Short Films, and feature- length Cheesy B-Movies that you can watch instantly. It's like watching movies with your funniest friends!"

They guys broadcast the event from the Belcourt Theatre in Nashville, Tennessee to hundreds of movie theaters across the country courtesy of the folks at Fathom Events. After some funny intros, they guys got down with doing what they do best!

The film SANTA CLAUS CONQUERS THE MARTINS is just awful. Just really, really, really awful. Now I've seen the film several times but seeing it with the RiffTrax crew made the pain more bearable. The plot goes something like this: Two lethargic martin kids (one of them is ten-year old Pia Zadora) are watching Earth television about the exploits of Santa Claus. This causes their parental units to be very concerned. Their father (and martin leader) Lomas takes a small crew to Earth to capture Santa. However, they also capture a couple of kids who spotted them: siblings Billy (Victor Stiles) and Betty (Donna Conforti). Soon they and Santa (John Call) are captured and are taken back to Mars. Eventually the martins all fall in love with Santa, that is all but the evil, grumpy martin Voldar, who plans to take out Santa and the kids! But in the end, Voldar is defeated, the martin children are full of Christmas spirit, and Santa, Billy, and Betty return to home just in time for Christmas Eve.

Ok so where do I begin with this film? Well for starters, I can't believe this was even made!! And people actually made money to see this!! It ranks slightly below Ed Wood's masterpiece PLAN NINE FROM OUTER SPACE as the worst movie ever made! The sets are just atrocious, the acting barely believable, and that annoying theme song "Hooray for Santa Claus"  will get stuck in your head! Thankfully, Michael, Bill, and Kevin were there to make the film funny! 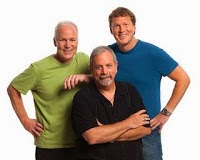 The RiffTrax crew had no problem tearing this film a new one. Like I stated earlier, the film was made fun on Mystery Science Theater 3000 back in the early 90's. When that episode originally aired, Kevin was on the show as Tom Servo. Michael was the head writer and Bill wasn't even on the show till Season 8. So this was an amazing and hilarious all- new riff with brand new jokes and Alison and I laughed so hard during the show!

Thanks for reading, and enjoy the show!
Posted by Philip Castor at 5:44 PM