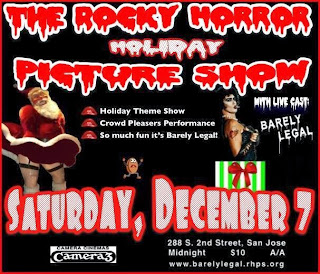 When the clock strikes midnight, that's when the crazy, freaking, scary people come out! And where are these ill-mannered, foul mouthed hooligans go to hang out? At the midnight screening of THE ROCKY HORROR PICTURE show at the Camera 3 in Downtown San Jose of course! To bring this cult classic to life, my good friends from Barely Legal Productions were there to act out along with the film! And once again my friend Sara was there with me to join in on this 37 year old midnight tradition! And it was also a special holiday themed show as well! What better way to say "Happy Holidays" than with transvestites and fishnet stockings!!

The night started off with a sexy, Burlesque type number with the luscious ladies of Barely Legal seducing Santa Claus to Eartha Kitt's rendition of "Santa Baby." Yup, I knew that this was going to be fun-filled, holiday show!! Oh-la-la!!

As always, Nate McHavoc (our Riff Raff) was our emcee for the night. He whipped up the crowd and got us all excited about the show. He introduced us to the cast members for that night's show and also subjected the "virgins" to the infamous butt dance. Once again there were a lot of virgins in the house! After picking out six victims....uh.....virgins....Nate subjected them to his embarrassing games and we all had a big laugh at their expense! It was awesome! After the games, the audience started sing Happy Birthday to cast member Lizzie Bernard who plays MAgenta! However, as some of you may know, we sing it quite differently. So the whole audience started singing, "Happy Birthday F#ck You!" It brought a tear to my eye!

As with the Fourth of July show, everyone was sporting holiday costumes, which included Santa hats, bells, red and green outfits, X-mas lights, and a certain someone dressed up in a snowman costume! Yes Virgina, there really is a talking snowman!! The Barely Legal cast turned in another fantastic performance once again, and the crowd had a blast! Sara and I had so much freaking fun!! 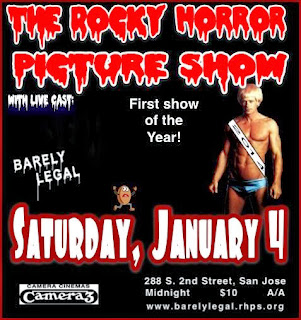 What an amazing night! Now just in case you missed out on all this midnight fun, fret not my friends! There will be another show here at the Camera 3 on January 4, 2014!! It's the first ROCKY show of the year people!! And as a reminder, Barely Legal are looking for new members so if you've ever wanted to be a star, now's your chance! To learn more about Barely Legal, their schedule, and how to become a member, visit their website at barelylegal.rhps.org. Also look for them on Facebook as well! Also visit the Camera Cinemas website at www.cameracinemas.com.

Thanks for reading, and enjoy the show!
Posted by Philip Castor at 6:04 PM