Phil sees INSIDE LLEWYN DAVIS at the Camera 7 Pruneyard Campbell-Dec. 28, 2013

I love folk music. Woody Guthrie, Pete Seeger, Bob Dylan, Dar Williams, and Peter, Paul, and Mary. The folk music revival of the 1960's in New York's Greenwich Village literally changed the face of music forever. Now the Coen Brothers once again return to the big screen to tell a story that takes place during this time frame. The end result is the folk music drama INSIDE LLEWYN DAVIS is one outstanding film! 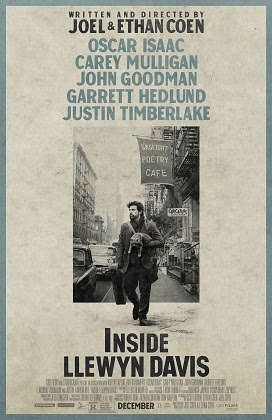 The film's official synopsis: Follow a week in the life of young folk singer Llewyn Davis (Oscar Isaac) as he navigates the Greenwich Village folk scene of 1961. Guitar in tow, huddled against the unforgiving New York winter, he is struggling to make it as a musician against seemingly insurmountable obstacles -- some of them of his own making.

Written, directed and edited by Joel and Ethan Coen, the film was inspired by folksinger Dave Van Ronk's  autobiography entitled The Mayor of MacDougal Street. (In fact, the album cover of Inside Llewyn Davis in the film is an exact copy of Ronk's album cover entitled Inside Dave Van Rok)Once again the Coen Brothers capture lightening in a bottle: crafting a complex story about the examination of a flawed, but likable, character and how he struggles to make it in life.

Oscar Issac gives his greatest performance ever in front of the camera. His portrayal of the struggling folksinger Davis is simplistic, relateable, and funny while simultaneously sad, tragic, and ironic. But Issac goes one step further and actually sings in the film! And he looks and sounds just like a 1960's folksinger! The film opens with Issac singing "Hang Me, Oh Hang Me" is he sounds amazing! Another interesting fact that must be made known is that, with the exception of one song, all the songs in the film are recorded live! Yes, that is very impressive!

Justin Timberlake also appears in the film as the loveable, yet naive, Jim, who is dating Llewyn's ex-girlfriend Jean (portrayed by the stunning Carey Mulligan). She just radiates on the silver screen and she steals all her scenes from her co-stars. Look for her nabbing a Best Supporting Actress nod from the Academy!

The film's soundtrack was produced by none other than T Bone Burnett, who also produced the award-winning soundtrack to the Coen's 2000 film O'BROTHER WHERE ART THOU? Burnett shows us his magic touch, as all the songs from the film sound and feel like classic folk songs from that era. Adding to that feeling is the inclusion of an unreleased studio version of "Farewell" by the great Bob Dylan!

INSIDE LLEWYN DAVIS is one of the greatest films the Coen brothers have ever made! Period! This is what great American cinema should look like people! From the first frame to the last, you will never find a more perfect film to watch! 5 out of 5 stars!! Highly recommended!!


INSIDE LLEWYN DAVIS is currently playing in theaters nationwide, including the Camera Cinemas here in the Bay Area. To view showtimes, visit their website at www.cameracinemas.com.

Posted by Philip Castor at 6:43 PM