It's interesting when discussing the career of Matthew McConaughey. After achieving cult status with the 1993 film DAZED AND CONFUSED, he went on to appear in, shall we say, less memorable features such as TEXAS CHAINSAW MASSACRE: THE NEXT GENERATION, CONTACT, THE WEDDING PLANNER, SAHARA, and FAILURE TO LAUNCH. But then in 2011, he starred in legendary director's William Friedkin's KILLER JOE. After receiving rave reviews for his performance, McConaughey went on to star in MUD and THE PAPER BOY. Now he gives his best performance ever in the new drama DALLAS BUYERS CLUB. 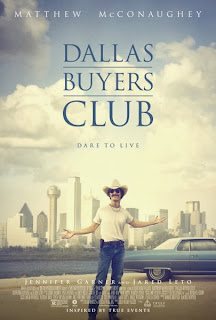 The film's official synopsis: Based on the incredible true story of real-life Texas electrician Ron Woodroof, an ordinary man who found himself in a life-or-death battle with the medical establishment, big pharmaceutical companies, and the U.S. government. In 1986, the volatile, free-wheeling Woodroof was blindsided by being diagnosed as HIV-positive and given 30 days to live. With the U.S. still internally divided over how to combat the virus and restricting medications, Ron banded together with an unlikely community of outcasts and tracked down alternative treatments from all over the world, by means both legal and illegal.

McConaughey is just utterly amazing and riveting in the film! His portrayal of Woodroof is sensitive, sincere, funny, and touching. To prepare for his role as the AIDS stricken Woodroof, McConaughey lost an astounding 50lbs! Now that is some dedicated method acting! Also worth noting is that the Ron changes before our very eyes. Here's a macho, tough, rodeo loving homophobic redneck to a thoughtful, sensitive, anti-establishment activist. His acting deserves an Oscar! And there's no doubt that he might very will win one!

One of the outcasts that Woodroof meets and befriends is Rayon (Jared Leto), a transgender woman and a patient of AZT, an early drug experiments that doctors thought would stop the AIDS virus. Like McConaughey, Leto literally transformed himself into the role of Rayon, who adds a lot of fun, flare, and is the perfect antithesis to Woodroof's redneck ways. But the two odd couple strike up a business partnership that morphs into one of the most beautiful friendships I have ever seen in a film. And like McConaughey, Leto lost a total of 30lbs for his role! And look for him to win an Oscar for Best Supporting Actor at the Academy Awards show!

Also making a memorable appearance in the film was Jennifer Garner as Dr. Eve Saks, the only doctor who not only befriends both Ron and Rayon, but also supports them and helps them fight against the Food and Drug Administration. Here Garner is going against the type of roles she's known for; that being the romantic comedies. Ironically, both McConaughey and Garner both starred in the romantic comedy GHOSTS OF GIRLFRIENDS PAST. Again, another Oscar winning performance!

Director Jean-Marc Vallée does a superb job of crafting the film; creating real drama and light comedy while showcasing real human emotions and real world events. In fact, there are snippets of real television footage of the fight against the AIDS epidemic and how the gay community protested against the government's lack of interest in finding a cure.


DALLAS BUYERS CLUB is currently playing in theaters nationwide, including the Camera Cinemas here in the Bay Area. To view showtimes, visit their website at www.cameracinemas.com.

Thanks for reading, and enjoy the show!
Posted by Philip Castor at 8:55 PM