When one mentions the Bettie Page out loud, a flood of images comes to mind: that face, those eyes, that sexy smile, those cute bangs, and a body that made men want to be with her! At the height of her popularity, she disappeared. Now thanks to the recently released documentary BETTIE PAGE REVEALS ALL we now get the full story of a young girl who transformed into a pin-up queen and pop culture icon who's influence is still being felt today. 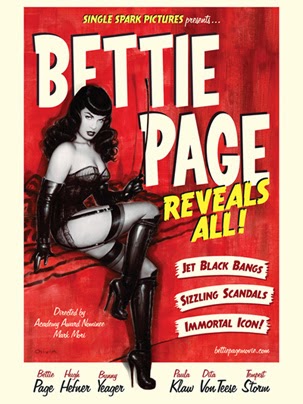 The film tells the entire life story of Bettie Page; all of the good, the bad, and the ugly that she unfortunately had to suffer through. By using a combination of popular and unreleased photographs, private home films, old newspaper clippings and onscreen interviews as well as with new interviews, director Mark Mori finally sets the record straight on her humble beginnings, her rise to fame and popularity, and mystery of what happened to her after she waked away at the height of her career.

After a fun and entertaining montage that accompany the opening credits, Mori starts off his documentary with footage of Bettie Page's funeral (she passed away on December 11, 2008 from pneumonia). I think this was very effective and poignant way to start off his film. What better way to tell Page's life by starting off with her death, then circling back to her beginnings.

Another fascinating aspect of the film is that is was narrated by Bettie Page herself! How is possible you maybe asking yourself? The answer is quite simple. Bettie's narration was culled from over 6 hours of interviews that Mori conducted with her prior to her death. So we hear the whole story from the pinup goddess in her own voice, which was just amazing to hear!

Mori gathered a who's who that were involved in Page's personal life and professional career as well as those who were influenced by her: Hugh M. Hefner, Mamie Van Doren, Julie Newmar, Todd Oldham, Perez Hilton, Rebecca Romijn, Bunny Yeager, Paula Klaw, Tempest Storm, and Dita Von Teese just to name a few!

While it's fascinating to her Page talk about her life, I found it very painful to hear all the grisly details that she had to go through: her parents got divorced when she was just ten years old, being molested by her father at age 13, living in an orphanage for a year with her two sisters. And that's the tip of the iceberg! Several failed marriages, government witch-hunts, becoming an evangelical Christianity, depression, violent mood swings, and spending several years in a state psychiatric hospital are all told in gruesome and horrifying detail by Page.

But there is light at the end of her story. Thanks to a resurgence in popularity during the 1980's, Page started to receive the respect and admiration that she so richly deserved, thus receiving the title "Queen of the Pinups."

BETTIE PAGE REVEAL ALL is one of my favorite documentaries of 2013!! This is far and away the best film ever about Bettie Page! Congrats to Mark Mori for making the definitive film about our favorite pinup queen! For all you BP fans out there, you need to see this movie!! 5 out of 5 stars!! Highly recommended!!

BETTIE PAGE REVEALS ALL is currently playing in select theaters nationwide, including the Camera Cinemas here in the Bay Area. To view showtimes, visit their website at www.cameracinemas.com.

Thanks for reading, and enjoy the show!
Posted by Philip Castor at 6:41 PM