I love the 1970's. I love the clothes, the music, the colors, the television shows, the toys, the looks, the sounds, and, of course, the movies. I love it all! Of course it doesn't hurt that I was born in the 70's and I remember it all so very vividly! So whenever I hear that there's a modern day film that takes place during that far out time, I will be the first person in line to see said film. So when I saw the trailer for AMERICAN HUSTLE, I knew I had to see when it came out. And that's exactly what I did! 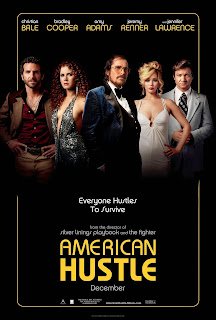 The film's official synopsis: A fictional film set in the alluring world of one of the most stunning scandals to rock our nation, American Hustle tells the story of brilliant con man Irving Rosenfeld (Christian Bale), who along with his equally cunning and seductive British partner Sydney Prosser (Amy Adams) is forced to work for a wild FBI agent Richie DiMaso (Bradley Cooper). DiMaso pushes them into a world of Jersey powerbrokers and mafia that's as dangerous as it is enchanting. Jeremy Renner is Carmine Polito, the passionate, volatile, New Jersey political operator caught between the con-artists and Feds. Irving's unpredictable wife Rosalyn (Jennifer Lawrence) could be the one to pull the thread that brings the entire world crashing down.

Writer and director David O. Russell (along with co-writer Eric Singer) once again knocks it out of the park with this film that is absolutely amazing! What I really enjoyed about the film was that story, which was so brilliantly written. It was a joy to watch the film's story unfold and to hear these larger than life characters speak. There is that element of surprise which I loved. But because you don't really know what's going to happen next, and you don't know what these characters are going to do, that really intrigues me and I sat impatiently in my chair and watched the film with a big 'ole smile on my face.

Once again Russell brought back his dynamic duo of Bradley Cooper and Jennifer Lawrence from last year's award winning film SILVER LINING PLAYBOOK. Christian Bale gets lost in another character, and his Irving is a character you love to hate. Well, hate is too strong of a word, but he is very sleazy! Bale turns in an awarding performance that will no doubt make the folks over at the Academy stand up and notice.

Amy Adams does it again; giving another Oscar-winning performance as Irving's love interest and partner Sydney Prosser. Here Amy goes in deep, pretending to be English and talking with an English accent (which by the way is so damn hot!) and has great on-screen chemistry with Bale. Now a lot of people will be talking about Amy's low, low low, low neck, cleavage revealing dress that she wears at the governor's party. Yes it's very risque. Yes, it's very sexy. And yes, she looks absolutely breathtaking in it that, if you're like me and wear glasses, they will fog up on you!

Another sexy siren actress showing what she's got is Jennifer Lawrence as Irving's lovable and clueless wife Rosalyn. Again she gives a performance that will no doubt earn her an Oscar for Best Supporting Actress. She's funny, sassy, annoying, and down right sexy! Her white evening gown for the fore mentioned governor's party is just stunning. And her on-screen kiss with Amy's Sydney has been the talk of the town. I'll just end it right there.

Bradley Cooper keeps on surprising me with his acting chops. Here his portrayal of FBI agent Richie DiMasois ambitious, self-righteous, and naive. He really brings a lot of depth to the character throughout the course of the film. Even in the scene when he's having dinner with his family and he has those little pink curlers in his hair, he still pulls it off with a straight face and doesn't make it too tongue-in-cheek. Now that's acting people!

AMERICAN HUSTLE is flat out an amazing film to see from start to finish! This is what great American cinema should be! Go see this film over and over again!! 5 out of 5 stars!! Highly recommended!!


AMERICAN HUSTLE is currently playing in theaters nationwide, including the Camera Cinemas here in the Bay Area. To view showtimes, visit their website at www.cameracinemas.com.

Thanks for reading, and enjoy the show!
Posted by Philip Castor at 6:38 PM