When I saw ANCHORMAN: THE LEGEND OF RON BURGANDY in theaters when it first came out back in 2004, it was the funniest film I saw that year. Fast forward to 2013 and I'm over at the Camera 12 in Downtown San Jose to see if lightening strikes twice. Yes my faithful readers, I went and saw ANCHORMAN 2: THE LEGEND CONTINUES and it was funnier than the first film! 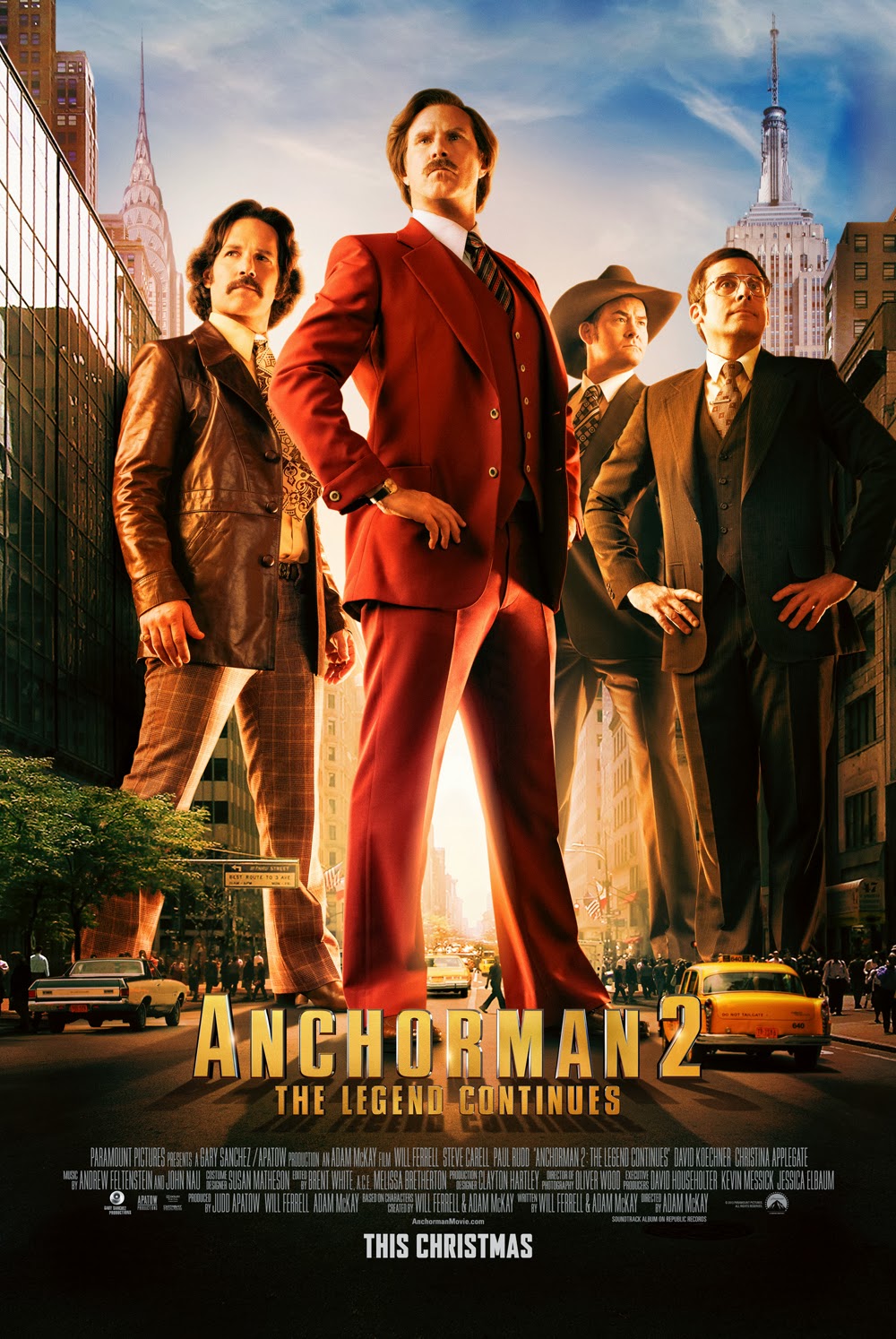 The film's official synopsis: Having left San Diego for New York City, Ron Burgundy (Will Farrell) is living the high life with his wife Veronica Corningstone (Christina Applegate) and son Walter Burgundy (Judah Nelson). However, when the boss decides to promote Veronica to full time lead anchor and fire Ron, everything changes. Now heading back to San Diego, Ron is washed up and working part time at Sea World. His shot at redemption though comes in the form of a man named Freddie Schapp (Dylan Baker), who's an executive producer at the Global News Network, the world's first 24 hour round the clock news channel. He hires Ron, who proceeds to reunite the news team of Champ (David Koechner), Brick(Steve Carell), and Brian (Paul Rudd), and head back to New York City. While there Ron and his news team are given the graveyard shift and a challenge. Ron comes up with a radical new idea to transform the news and that puts him at the top of the game once again. But how long will Ron's new found fame last? And will Brick finally find true love?

As I said in the beginning, the film is funnier than the first one, and I thought that was impossible. But director Adam McKay does a tremendous job creating a sequel that's funnier, crazier, and wilder than its predecessor. Of course it doesn't hurt that McKay once again teamed up with Farrell to write this outrageous follow up! These two madmen have done the franchise justice with this latest installment!

The old gang that we know and love return to their respective characters and they are fantastic! Farrell, Rudd, Carell, and Koechner are just as rambunctious as they were in the first film, but here the laughter is cranked up to eleven! I was laughing the entire time and I swear at one point I thought I was going to piss in my pants because I was laughing so damn hard! While there is a script to follow, I often wondered how much was scripted and what was improved. When you ave these four comedy geniuses in one scene, lookout! Cause there is some very funny shit that's gonna happen!

The film also features the return of the lovely Christina Applegate (who is fabulous in the film) as Ron's now estranged wife Veronica well as a few other familiar faces from the previous feature. But this is a sequel and there are some new faces to get acquainted with. There's the previously mentioned Dylan Baker's character Freddie Schapp, GNN executive producer Linda Jackson (the extremely sexy Meagan Good), Ron's new arch nemesis Jack Lime (the versatile James Marsden), and Veronica's new love interest Gary (Greg Kinnear).

There is a whole boat load of cameos from famous celebrities in this film! There's Harrison Ford as Ron and Veronica's boss Kristen Wiig as the very strange Chani Lastnamé, who just so happens to capture Brick's heart! That alone you need to see! Then there's the big climatic clash between Ron's and Jack's News Crew and, in case you where wondering, this battle out does the big news crew battle from the previous one! And it's a who's who of famous faces: Liam Neeson, John C. Reilly, Tina Fey, Amy Poehler, and Kanye West just to name a few! Now that you gotta see!

ANCHORMAN 2: THE LEGEND CONTINUES truly is the funniest films of 2013!! Whatever you do don't eat your popcorn or drink your soda while watching this film! Because you will choke due to the fact that this is one helluva funny film!! Go see it!! 5 out of 5 stars!! Highly recommended!!


ANCHORMAN 2: THE LEGEND CONTINUES is currently playing in theaters nationwide, including the Camera Cinemas here in the Bay Area. To view showtimes, visit their website at www.cameracinemas.com.

Thanks for reading, and enjoy the show!
Posted by Philip Castor at 6:39 PM