In 2010, director Robert Rodriguez released the full length film MACHETE, which was based on the fake trailer that he made for his and Quentin Tarantino's loving tribute to exploitation films; 2007's GRINDHOUSE. Featuring an all-star cast including Danny Trejo, Jessica Alba, Robert De Niro, Michelle Rodriguez, and Steven Seagal to name a few, MACHETE received positive reviews and grindhouse fans loved the over-the-top violence, sexual innuendos, and seeing a Mexican as the hero for once. Three years later, I'm over at the Camera 12 in Downtown San Jose to see the latest installment of the series MACHETE KILLS. 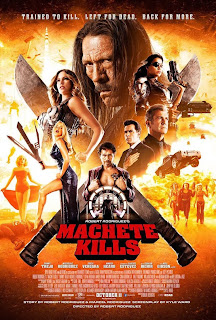 The film's official synopsis: “Machete Kills” is an action-packed thrill ride about the adventures of legendary secret agent Machete Cortez (Danny Trejo). In his latest mission, Machete is recruited by the U.S. President (Carlos Estevez) to stop a crazed global terrorist (Mel Gibson) from starting a nuclear war. With a bounty on his head, Machete faces death at every turn from an all-star cast of deadly assassins. Breaking all the rules, visionary director Robert Rodriguez leads this star-studded ensemble on one of the wildest adventures to save the world ever captured on film!

After watching the film, I can honestly say (and agree) that it really is one of the wildest adventures to save the world ever captured on film!

The film opens actually with a fake trailer (or possible sequel?) for MACHETE KILLS...IN SPACE! Now it plays like an old 1970's Roger Corman type trailer (think STAR CRASH or BATTLE BEYOND THE STARS), filled with cheesy special effects, coarse language, sci-fi violence, and sexy space babes. So please Robert, make this into a real movie!! I will pay you big bucks for this!! Actually, I don't have a lot of money, so I promise to buy a ticket to see this when it comes out!!

Now the main film itself is filled with so many classic grindhouse cliches that I had a blast watching it. Now what's really interesting is just how complex and involved the plot is. There's at least three different subplots interweaving with the main plot point. Writer Kyle Ward wrote the screenplay for the film, which was based on the story by Robert and his brother Marcel Rodriguez. Major points go to these three individuals who took Machete and his universe to the next level.

Actor Danny Trejo looks bad ass in the film (but he always does anyway), and also returning to help aid him on his mission is the foxy Michelle Rodriguez, back once as Luz. Now two very interesting casting choices were made for the film:

1) Charlie Sheen as Mr. President. Yes the guy who excels at "winning" is cast as the President of the United States. In the film he's billed as Carlos Estevez, which in case you didn't know, is his real name! Watching him as the president was just so damn cool!

2) Mel Gibson as the vilianous Voz. The film marks the first time that Mel has played a villain since 1998's PAYBACK. After all the crazy shenanigans that Mr. Gibson has done in his personal life, it's great to see him in a role that was custom made for him, and he nails his character perfectly!

Also stick around during the end credits. There are not one, but two bonus scenes at the end and are a fun treat to watch!

For some reason, the film hasn't been doing very well at the box office and I really don't understand why? Maybe Robert waited to long to make this sequel? Maybe people forgot about the original? Or maybe the exploitation craze is over? Who knows, but it really is a shame that not a lot of people are seeing this movie.

Overall, MACHETE KILLS a glorious over-the-top exploitation classic that will thrill fans of the original! Let's face it, a lot of Hollywood films take themselves way too seriously. Here's a film that is the antithesis to all those so-called Academy Award contenders. This film right here is the real deal! Accept no substitutes!! 4 out of 5 stars!! Recommended!!


MACHETE KILLS is currently playing in theaters nationwide, including at the Camera Cinemas here in the Bay Area. To view showtimes, visit their website at www.cameracinemas.com.

Thanks for reading, and enjoy the show!
Posted by Philip Castor at 7:49 PM