Phil counts down to the BIG WOW! COMICFEST at the San Jose Convention Center May 17-18, 2014 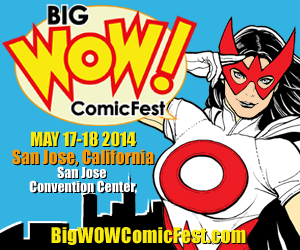 Hey kids! What time is it? That's right! It's summertime! School's out. College graduations are commencing. And you know what else? That's right! The Big WOW! ComicFest returns to the San Jose Convention Center this weekend May 17th and 18th! Yes, San Jose's premier comic book show is back with comic book artists, gamers, filmmakers, cosplayers and costume contests, local and international celebraties and so much more!

With Hollywood's big GODZILLA remake opening this weekend, Big WOW! pulled out all the stops by having several  legendary Japanese actors appearing at the fest! First is Kenpachiro Satsuma, who first came to fame by donning the famous Godzilla suit for the 1984 film RETURN OF GODZILLA. After the film's release, he would play the famed reptile 11 more times! Joining him are actors Satoshi “Bin” Furuya, best known for being the original Ultraman, and Daisuke Ban, best known for his title roles in "two of the most iconic series of all time, KIKAIDA and INAZUMAN!" If you are a true Japanese fan, then you will want to meet these three acting icons!

As for Big WOW! celebrities, look no further than William Katt (from the TV series The Greatest American Hero, CARRIE, HOUSE), Clare Kramer (from the TV series Buffy the Vampire Slayer, BRING IT ON, and BIG ASS SPIDER), Richard Kiel ("Jaws" in the James Bond films, HAPPY GILMORE) Costas Mandylor (from the TV series Picket Fences, the SAW series), Kevin B. Grevioux (co-writer and producer of the  UNDERWORLD films), Jane Wiedlin (guitarist of The Go-Go's), and Alison MacInnis ( Dana Mitchell the Pink Ranger on the current season of Power Rangers Super Megaforce) just to name a few!

Fans will also meet some of the finest cosplayers around, including Valerie Perez (Wonder Woman),  Anthony Misiano (The Joker), Ivy Doomkitty, and Vegas Powergirl for starters. Then there's all the comic book artists at the Underground and Artist's Alley creating original works of art, the cool Anima area that includes my friend Carlyfornia, plus all the dealers, toys, comics and everything else you can imagine!

There's also cool programs and panels during the two days, including a Power Rangers panel, Top Cow Studios panel, Cosplay 101, Cultural Diversity in Comics, a Costume Contest and so much more. Plus there's also going to be a Magic the Gathering Tournaments for all you gamers out there!

Some of the big events to check out is the1st Annual Famous Monsters Film Festival, hosted by the fine folks over at Famous Monsters of Filmland, "the magazine that has inspired generations of imaginations such as Peter Jackson, Guillermo del Toro, Steven Spielberg, and many more." The film festival will be running the entire first day and some of Sunday morning. Also worth checking out is the Batman Museum: Celebrating 75 years of the famed Caped Crusader! Witness and marvel (no pun intended) at rare original artwork, toys, games, posters and collectibles of all kinds!

So what are you waiting for? Start planing to attend Northern California's premiere comic book and entertainment event! To learn more about the convention and to purchase tickets and passes, please visit Big WOW! ComicFest's official website at www.bigwowcomicfest.com.

Thanks for reading, and enjoy the show!
Posted by Philip Castor at 9:07 PM