Now as some of you might now, I'll watch any kind of movie out there. Even the so-called "Chick Flicks" that most men will dread taking their female companion to. But there's been a recent trend that has taken Hollywood by storm: raunchy chick flick comedies. Seriously, the films are funny as hell and can rival their male counterparts! So another excellent edition to this genre is the film BAD MOMS from the folks at STX Entertainment. 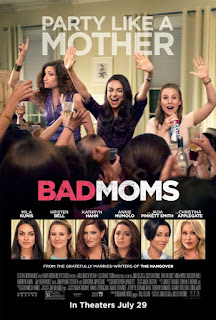 The film's official synopsis: Amy (Mila Kunis) has a seemingly perfect life - a great marriage, over-achieving kids, a beautiful home and a career. However, she's overworked, over-committed and exhausted to the point that she's about to snap. Fed up, she joins forces with two other over-stressed moms on a quest to liberate themselves from conventional responsibilities - going on a wild, un-mom-like binge of long overdue freedom, fun and self-indulgence - putting them on a collision course with PTA Queen Bee Gwendolyn (Christina Applegate) and her clique of devoted perfect moms.

Writer/director Jon Lucas and co-writer Scott Moore pull off of the funniest comedies I've seen in a while. The script is both huge on laughs while wears its heart and feelings on its sleeve. Their characters looks and sound like real moms who basically do it all: having a career, being a parent, drive the kids to and from school, running errands, do the cooking and the house cleaning, laundry, etc. I've always said that mom's are our superheroes and they don't get enough credit for all that they do for us. Also keep in mind they also carried us around for nine months, so remember that everyday is Mother's Day. Lucas also finds that perfect balance of comedy and emotion with his directing. He has clean medium and wide shots and compositions so we can see every single sight gag, every joke said, every tear shed and every moment of all these incredible moms and all the bullshit that they deal with everyday.

Leading the bad moms crew is actress/sex symbol Kunis, who is just outstanding as our frustrated, stressed out, overwhelmed and under appreciated mom Amy. Once she reaches her breaking point is where the fun begins and we see how her decision of quitting at being a mom both re-energizes and re-discovers of who she is. Kristen Bell's Kiki is one of her best roles she's ever done. She goes against type and plays Kiki had thus soft spoken, naive, low self-esteemed stay-at-home mom who is pushed around and dominated by her asshole husband. But there's a lot of growth with Kiki and Bell's performance is awesomely funny! Rounding out the group is bad girl Carla, portrayed by the hilariously raunchy Kathryn Hahn. I loved her character Carla. She had the best one-liners, is  tough as they come and is just drop dead sexy! I love this woman! Together, these three actresses have great on-screen chemistry and they are freaking funny as hell. Don't believe me? Just watch the grocery store scene and try hard not to laugh your ass off!!

As with all movies, your hero is only as good as your villain. In this case, Amy's main antagonist is the wicked bitch from the west Gwendolyn, played by Applegate. This woman is one evil bitch: she's a rich wife,  she's head of the PTA, she's rich, she bosses everybody around including the school staff and she comes off as the perfect mom who can't do wrong. When she bumps heads with Amy, all hell breaks loose. Gwendolyn, along with her cronies Stacy (Jada Pinkett-Smith) and Vicky (Annie Mumolo) go after Amy, her kids and her reputation as a mom while she and her bad moms crew retaliate and the results is pure comedy gold!!

Now maybe it's just me, but my opinion is that America is a pretty up tight place. Or maybe they think that women aren't funny. Whatever the case may be, the film received a lot of negative feedback, was panned by critics and was just trashed by audiences. I know what you're gonna say people. Everybody's a critic, but remember, film's are a form of entertainment. They are designed to enlighten you, enrich you, open you're eyes to the problems of the world, or they're just there to entertain you and offer you an escape from the real world for about 90 minutes. This film wasn't to be taken seriously. It was supposed to entertain you and make you laugh your ass off. And that's just what it did for me! It accomplished both endeavors and it was great!! And despite the negative reviews, it went on to gross $179.4 million worldwide! Not too bad considering the film's budget was only $20 million.

BAD MOMS is one of the funniest movies of 2016!! If you're a mom, then you will love this movie! If you love raunchy comedies, then this is right up your alley! This is one helluva funny movie and you definitely need to see this!! 5 out of 5 stars!! Highly recommended!!


BAD MOMS is available on both Blu-Ray and DVD. The movie is also available on iTunes, Video On Demand, digital download and Netflix.

Thanks for reading, and enjoy the show!
Posted by Philip Castor at 9:11 PM