In 1964, writer Stan Lee and artist Steve Ditko (the creators of Spider-Man) unleashed a new and different type of superhero, one that would have a huge impact on the Marvel Universe. With this one character, a whole new universe opened up and the world of magic was unleashed, bringing with it the concept of multiverses. Now over 50 years later, this iconic and legendary comic book character has finally joined the Marvel Cinematic Universe. So let's chat about me seeing DOCTOR STRANGE in 3D this past weekend! 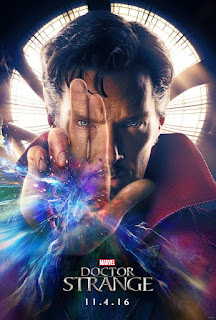 The film's official synopsis: Marvel's "Doctor Strange" follows the story of the talented neurosurgeon Doctor Stephen Strange who, after a tragic car accident, must put ego aside and learn the secrets of a hidden world of mysticism and alternate dimensions. Based in New York City's Greenwich Village, Doctor Strange must act as an intermediary between the real world and what lies beyond, utilising a vast array of metaphysical abilities and artifacts to protect the Marvel Cinematic Universe.

I have one word to say about the movie: WOW!! When Marvel released CAPTAIN AMERICA: THE WINTER SOILDER, CAPTAIN AMERICA: CIVIL WAR and GUARDIANS OF THE GALAXY, the bar was set very, very high to the point that I didn't think it would be possible to surpass these high acclaimed films, let alone have it even come close. But remember, this Marvel we're talking about here. Needless to say, this latest chapter in the MCU is one of their very best films!

British actor Benedict Cumberbatch is one of the finest actors out there today and this role was taylor made for him. First, he's speaking with an American accent, which is just weird but cool to hear. Second, he brings a lot of  depth and humility to Doctor Steven Strange. When we first meet him, he is a gifted but very arrogant, conceded and selfish individual. It isn't till after the accident that he becomes worse. For him to come back from and become the hero is a massive undertaking. Cumberbatch brings his A-game and the embraces the character completely. Don't bother looking him in the movie you won't be able to find him. All you will see on the big screen is Doctor Strange himself.

Joining Cumberbatch on this marvelous (get it!) journey into this newly opened part of the MCU is Rachel McAdams, who plays Strange's co-worker and love interest Christine Palmer. Strong, devoted and a woman you don't want to piss off, I'm hoping we see more of her in upcoming films. While I loved her character, I think they didn't utilize her enough so here's to keeping our fingers crossed. Tilda Swinton was fantastic as Strange's mentor The Ancient One and I was very impressed on how devoted she was with portraying this beloved Marvel character. Benedict Wong's character Wong was hilarious and bad ass, so let's see more of him. Finally there's Mordo, played by actor Chiwetel Ejiofor. He's The Ancient One's right hand man and one incredible being. A gifted sorcerer, Mordo plays off Strange well and the two have great on-screen chemistry but things might not be alright with him.

As you can see, I'm trying not to reveal any spoilers if you have not seen this movie yet (and if not why the hell are you reading this?). But I will tell you that there are the standard two end credit scenes so no big surprise there. However, these two scenes also set up two major events that will be revealed in upcoming MCU films! So, heck yeah I'm super excited to see where all this goes!

While it's a superhero movie, it's all about the magical and mystical side of Marvel that most people do t even realize yet. With this movie, a new doorway has been opened and it leads to other worlds, other realms, other dimensions that have yet to reveal themselves. The MCU is about to become an even bigger world thanks in large part to not only Doctor Strang, but to Lee and Ditko for creating one of the most important characters in comic book history.

DOCTOR STRANGE in 3D is one of the best Marvel films that you will ever see on the big screen! With all of Marvel Studios films, you need to see it on the big screen! And yes definitely see it in 3D!! It will totally blow your mind wide open!! 5 out of 5 stars!! Highly recommended!!


DOCTOR STRANGE is currently playing in both 2D and 3D in theaters nationwide. The movie is also being shown at select IMAX theaters as well. Check your local listings to see if it's playing at a theater near you.

Thanks for reading, and enjoy the show!
Posted by Philip Castor at 2:44 PM