Every now and then I'll see a movie that completely takes me into another world that I've never seen before. Others introduce me to exciting and interesting characters that I've never met before or show  me stories and lives that I haven't lived yet. And then there another film's that make ask myself, "What the f*ck to I just f*cking Watch?!? Seriously, what the f*ck was that?!?" Yup, this happened to me recently when I finally sat down to watch SAUSAGE PARTY from Sony Pictures. 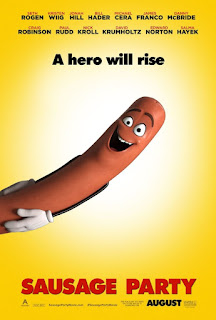 The film's official synopsis: In this R-rated CG-animated movie, one sausage leads a group of supermarket products on a quest to discover the truth about their existence and what really happens when they become chosen to leave the grocery store. The film features the vocal talents of some of today’s best comedy stars – Seth Rogen, Kristen Wiig, Jonah Hill, Bill Hader, Michael Cera, James Franco, Danny McBride, Craig Robinson, Paul Rudd, Nick Kroll, David Krumholtz, Edward Norton, and Salma Hayek.

Ok, I'm forgoing my usual review and just doing something completely different. Was this an original film? Yes. Was it funny? We're the voiceover actors great? Yes. Did it have funny characters? Yes. Was it politically incorrect? Yes. Was it racist? Yes. Was it misogynistic? Yes. Was it highly offensive? Yes? Was it way over the top? Yes? Was it made for adults? Yes. And lastly, was I entertained? Yes I was!!

I can honestly say that I have never seen anything like this before! Ever! And I've watched some crazy shit in my lifetime!! I mean for crying out loud, I watch Troma movies!! But this was something all together new. And the end of the third act?!? Holy shit I did not see that coming at all!! All I can say is that that shit never happened when I worked at Safeway back in the day!!

SAUSAGE PARTY is one of the most f*cked up, disturbing and hilarious animated comedies I have ever seen!! And it's also the best comedy film of 2016!! The filmmakers really pushed the envelope with this movie! It's not what you'd expect. It's something more, way more than you can possibly imagine. So, if you want to politically and socially offended, then go see this movie!! 5 out of 5 stars!! Highly recommended!!

Thanks for reading, and enjoy the show!
Posted by Philip Castor at 6:00 AM