Welcome back to another installment of my Halloween Horror Watch marathon! Today's film adventure took me back to the lovely coastal town of Monterey! There at the Osio Theater in downtown Monterey, they were showing two films that I was really excited to see (more on the second film later on). The first film I saw was the holiday horror film BETTER WATCH OUT, which was a wonderful way to start my cinematic day! 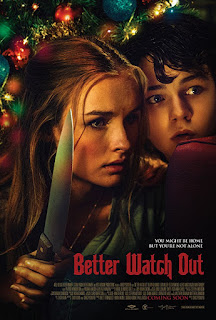 The film's official synopsis: This holiday season, you may be home, but you’re not alone... In this fresh and gleefully twisted spin on home-invasion horror, babysitter Ashley (Olivia DeJonge) must defend her young charges Luke (Levi Miller) and his best friend Garrett (Ed Oxenbould ) when intruders break into the house one snowy night – or so she thinks.

The cast is absolutely outstanding in their respective roles. Olivia DeJonge is just reveting as our main protagonist Ashley. Tough, vulnerable and fierce, she could very well become this generation's new final girl! Levi Miller's Luke characters is the personification of all us young boys who had crushes on their babysitters. I mean, who hasn't had that one babysitter who we used to dream about? Ed Oxenbould plays Luke's stoner best friend Garrett. Fun fact: both DeJonge and Oxenbould played siblings in M. Night Shyamalan's 2015 thriller THE VISIT. Overall, all three of them have excellent on-screen chemistry, which elevated the film for me. Really enjoyed their performances in the movie!

Filmmaker Chris Peckover directed the film and co-wrote the screenplay with Zack Kahn. Together, these two gentlemen made one of the smartest films ever! The set-up is straight forward, however, by the end of the first act, the film did a complete 180 degrees and the movie became something completely different. I can't remember the last time I was impressed with a movie, where I figured out the plot, only to have it surprise the hell out of me! Peckover's directing is sharp, percise and moves the film at an even pace. Really great filmmaking from this awesome filmmaker!

Originally titled as Safe Neighborhood, the film a big splash when it was the Fantastic Fest in 2016. It went on to garner acclaim at other festivals before being picked up for distribution by Well Go USA Entertainment.

BETTER WATCH OUT is my new favorite holiday horror film of all time!! This is one of the most original, entertaining and sick horror movie I've seen in a long time!! You owe it to yourself to go see this festive fright flick on the big screen!! 5 out of 5 stars!! Highly recommended!!


BETTER WATCH OUT is currently playing in limited release in theaters nationwide, including at the Osio Theater in Monterey. To view showtimes, visit their website at osiotheater.com. To view the film's website for future screenings, visit www.wellgousa.com/theatrical/better-watch-out.

Thanks for reading, and enjoy the show!
Posted by Philip Castor at 7:31 PM