Hello again and welcome back to my Halloween Horror Watch marathon! So in the previous post I mentioned that I was at the Osio Theater in Downtown Monterey to see two films. The second film would be a very special theatrical roadshow screening of filmmaker Adam Green's surprised latest installment of his HATCHET series VICTOR CROWLEY from Dark Sky Films!! To make the event even more amazing, Scream Queen actress Tiffany Shepis, who also appears in the film, was going to be there live in-person!! 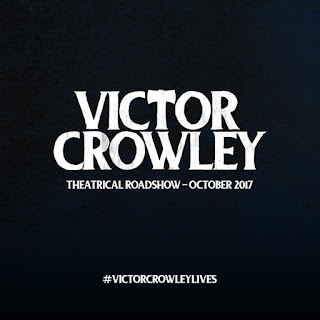 The film's official synopsis: Andrew Yong has spent over a decade claiming that local legend Victor Crowley was responsible for the 2007 massacre that left over 40 dead. Yong’s allegations have been met with widespread disbelief, but when a twist of fate puts him back at the scene of the tragedy, Crowley is mistakenly resurrected and Yong must face the bloodthirsty ghost from his past.

Adam Green spent two years making the film in secrecy, which is an unbelievable feat unto itself!! On August 22, 2017, he surprised an unsuspecting audience during the “10th Anniversary” screening of the original HATCHET film that he held at the Arclight Theater in Hollywood with the film. Needless to say, the audience went completely batshit crazy!! The film received two standing ovations and Green announced that he would be taking the film on a theatrical roadshow around the country. As he mentions in his blog post after the screening he hopes, "that no one who saw the movie last night or who will be seeing it soon on this upcoming tour spoils anything about it on-line either." So, per Mr. Green's request, this will be a spoiler-free review.

Green proves that he still has it when it comes to delivering a film filled with laughs, blood and gore! The script is very funny and very clever, especially on how Victor Crowley comes back from the dead! It's rather quite genius if you ask me. It has a great three act story arc, fun characters and the kills are bloody plentiful. His directing is sharp, clean and fantastic; treating the Hatchet Army fanatics with a worthy installment in the HATCHET franchise!!

The cast is incredible and give it their all! The iconic Kane Hodder returns once again as the indestructible Victor Crowley, who returns to kill again in his Honey Island Swamp again! The man hasn't lost a beat and his kills are freaking sick and bloody! Felicia Rose plays Andrew Young's publicist and she nails her part. Speaking of Young, actor Parry Shen brings depth to his role as well as laughs. Tiffany Shepis portrays Casey and is awesome in the part! Laura Ortiz of Holliston fame gives the performance of the year as Rose. Breakout Performance goes to actress Katie Booth for her portrayal of Chloe. She brings a lot of depth and vulnerability to the role and is phenomenal!

After the screening, Shepis participated in a fun-filled and informative Q&A with the audience. She recalled making the film in secrecy, working with Kane Hodder again, her humble beginnings as an upcoming actress, her Troma roots and what's up on the horizon regarding new projects she's currently involved in. Afterwards, she took pictures with her fans, and yours truly, finally got to meet this awesomely talented and lovely lady! This was one of the best nights of my life!

VICTOR CROWLEY is a funnier-that-hell, gore filled, bloody rollacoaster ride of a sequel of all time!! This was such a damn cool movie that I cannot wait for it to come out on Blu-Ray so I can watch it over and over again!! If this movie comes to a town near you, make it an effort to go see it on the big screen!! 5 out of 5 stars!! Highly recommended!!


VICTOR CROWLEY is currently on a theatrical roadshow across the country. To view the film's schedule to see if it's playing near you, visit the ArieScope Pctures website at ariescope.com. To learn more about Dark Sky Films and their film library, visit their website at darkskyfilms.com.

Thanks for reading, and enjoy the show!
Posted by Philip Castor at 7:08 PM