Hello and welcome to another installment of my horror movie marathon! Boy, I've been watching a lot of horror films this month!! One of them I saw this past Monday at the Cinelux Almaden Theater. The film has already garnered a lot of positive press and was the Number #1 film this past weekend!! It's hear that I saw HAPPY DEATH DAY, the newest film from Blumhouse Productions and Universal Pictures. 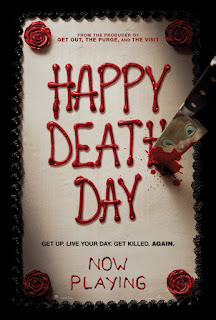 The film's official synopsis: Blumhouse (SPLIT, GET OUT, WHIPLASH) produces an original and inventive rewinding thriller in Happy Death Day, in which a college student (Jessica Rothe, LA LA LAND) relives the day of her murder with both its unexceptional details and terrifying end until she discovers her killer’s identity.

I recall seeing the trailer and thought that it looked interesting. Basically, it looked like GROUNDHOG DAY meets MEAN GIRLS meets FRIDAY THE 13th all rolled up into one movie. While as generic that may sound, the film itself was a blast to watch!

First, hats off to screenwriter Scott Lobdell for coming up with a fun and clever script that had cool characters, great villain and inspiring kills! Lobdell is best known as a comic book writer, having penned several Marvel titles like Fantastic Four, Alpha Flight, Uncanny X-Men and Generation X, which he created with artist Chris Bachalo. legend has it that Lobdell wrote the film's script over ten years ago and Michael Bay was to produce it and star Megan Fox under its original title HALF TO DEATH. Then on October 11, 2016, Blumhouse Productions were going to make the film with Christopher Landon directing the project.  Landon is no stranger to the horror genre, having helming films like PARANORMAL ACTIVITY: THE MARKED ONES and SCOUTS GUIDE TO THE ZOMBIE APOCALYPSE and was the writer for DISTURBIA, VIRAL, SCOUTS GUIDE TO THE ZOMBIE APOCALYPSE and PARANORMAL ACTIVITY 2-4 and the THE MARKED ONES. Landon does an exceptional job of crafting a solid film with that perfect balance of laughs, scares and mystery. A terrific job from these two individuals who know how to keep our interests!

Our heroine Tree Gelbman is portrayed by the very talented Jessica Rothe. Tree isn't your typical sorority rich bitch. There's a reason she's a self-absorbed, snotty and downright rude; she's been through a lot and throughout the movie she evolves and changes, but still has that cunning and at the end, she becomes that bad ass final girl horror fans have grown to love. Her companion on this never-ending day trip is Carter Davis, played by Israel Broussard. Both have great on-screen chemistry and it was great to see their characters interact with one another, especially Tree remembering everything and Carter always is the same person but not in the same sense as the previous day.

HAPPY DEATH DAY is a clever and entertaining slasher horror thriller that will keep you guessing all the way to the final scenes!! Don't give this movie a pass! Go to your local theater, grab some popcorn, snacks and drinks, and then sit back and have a good time!! 4 1/2 out 5 stars!! Highly recommended!!


HAPPY DEATH DAY is currently playing in theaters nationwide, including at the Cinelux Theaters here in the Bay Area. To view showtimes, visit their website at www.cineluxtheatres.com.

Thanks for reading, and enjoy the show!
Posted by Philip Castor at 6:02 PM