When one thinks of modern day cult classics, there's one film that rises above them all: THE ROOM. Written, produced, directed and starring Tommy Wiseau, his infamous 2003 work of art is both hilariously awful and deeply personal. It is considered one of the worst films ever made, which sparked midnight screening all across the country. It has gained an almost mythical cult classic status in the last ten years, propelling Tommy Wiseau into a mythical character. To this day we still don't know who he is, how old is he, where does he come from and where he got the money for the movie. It was only a matter of time before Hollywood became interested in this mystery man, and the one responsible of tackling this subject was none other than James Franco. Along with his younger brother Dave Franco, Seth Rogen, Ari Graynor, Paul Scheer, and Alison Brie, his latest film THE DISASTER ARTIST tells the tale of the making of THE ROOM and all the drama that went on behind the scenes. 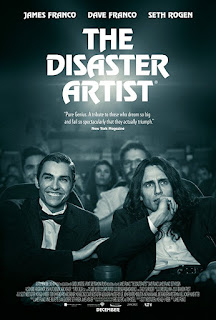 The film's official synopsis:  With THE DISASTER ARTIST, James Franco transforms the tragicomic true-story of aspiring filmmaker and infamous Hollywood outsider Tommy Wiseau—an artist whose passion was as sincere as his methods were questionable—into a celebration of friendship, artistic expression, and dreams pursued against insurmountable odds. Based on Greg Sestero best-selling tell-all about the making of Tommy's cult-classic disasterpiece THE ROOM (“The Greatest Bad Movie Ever Made”), THE DISASTER ARTIST is a hilarious and welcome reminder that there is more than one way to become a legend—and no limit to what you can achieve when you have absolutely no idea what you're doing.

This was such a great movie!! James was so believable as the enigmatic Tommy Wiseau! In fact, I only saw Tommy Wiseau; I couldn't find James Franco at all!! Not only was performance was fantastic, but he's directing was absolutely incredible!! His re-creation of several key scenes from THE ROOM was spot-on perfect!! Not only that, he is able to keep the laughs coming while injecting drama within the movie frames. Franco has become a force to be reckon with within the Hollywood community. His resume is very eclectic and personal, taking on roles and projects that really reflect his diverse interests of subjects.

And I cannot forget to mention his younger brother Dave Franco, portrays Tommy's best friend and fellow actor Greg Sestero. Now I have to admit that when I first saw him on the ninth season of the tv series Scrubs, I thought he was a decent actor, but he wasn't as talented as James. Now all these years later, Dave killed it as Greg! He's vulnerable, sympathetic and unsure of himself at times. Dave really nailed all these faults as well as all of Greg's attributes. Together, both James and Dave brought a sence of realism and absurdity to the film, which elevates it from great to Oscar worthy!!

So far the film has grossed $22 million worldwide against it's budget of $10 million. It has garnered acclaim from both critics and fans, especially fans of THE ROOM. It's been nominated for several awards, which is again ironic since we're talking about a film that is about the making of one of the worst films ever made!

THE DISASTER ARTIST is one of my favorite films of 2017!! The film just sucks you in and doesn't let go until its beautiful conclusion! If this film wins any awards this coming year, it would be richly deserved and poetically ironic since THE ROOM won't win any!! 5 out of 5 stars!! Highly recommended!!


THE DISASTER ARTIST is now currently playing in theaters nationwide, including at the AMC Theaters here in the Bay Area. To view showtimes, visit their website at http://www.amctheatres.com.

Thanks for reading, and enjoy the show!
Posted by Philip Castor at 11:11 PM