Well, I didn't wait long to see STAR WARS: THE LAST JEDI again. This time I took my girlfriend Stephanie to see it at the Century 20 Theaters in Oakridge Mall, located here in South San Jose. So after seeing it on Monday after work, I told her all about it (spoiler free of course) and that I need to take her to see it. So we went the very next day and caught the 11:45am screening of the film. 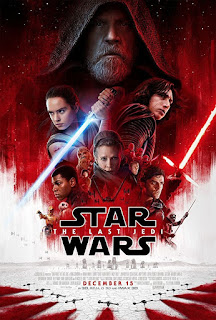 Over two hours later, we exited the theater and I asked her what she thought of the film. All she could say was, "That was so awesome!" I sensed she was a little overwhelmed and was still trying to process the movie. Having seen it a second time, I caught more details that I missed the day before. As I said in my original review, Johnson has deliberately taken the franchise into uncharted territory. There is so much happening in the film that it requires multiple viewings, which I was planning to do anyway.

STAR WARS: THE LAST JEDI is currently playing in theaters nationwide, including the Century Theaters here in the Bay Area. To view showtimes, visit their website at http://cinemark.com.

Thanks for reading, and enjoy the show!
Posted by Philip Castor at 10:21 PM