Yup, I saw STAR WARS: THE LAST JEDI for the third time today! This time, I took my old friend Dina to see the film. We've been friends for over 25 years, and she is a huge STAR WARS fan! She hadn't seen the movie yet, so I thought it would be fun to take her to the Cinemark Century in Oakridge Mall. We also saw it in their special XD theater with the soft, comfy chairs too! Yeah, it felt real nice to sit in those reclining leather chairs! 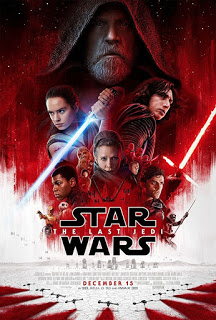 After the screening was over, I asked her what her thoughts and opinions on the film. She basically said the same thing as Stephanie did: it was awesome, action packed and the story was amazing!! Since this was a third time watching it, I was able to pick up things that I missed the previous two times. In my original review, I said that the film's story is a dark one; born out of annihilation and darkness and ends in hope and light. I was completely blown away by the film's script as it took me on a very different path that I thought I was going to travel on, based on how the last film ended. This is all true but somehow I totally missed the message in the movie: hope!

It was referenced all throughout the film. The main line, "We are the spark that will burn the First Order down." is about hope. The ending of the film offers us that hope will rise again throughout the galaxy. And that hope will bring the end to the First Order. It is a powerful message; one that reflects on what has happened in this country since Trump took over the White House and ushered in his reign of tyranny over America. But now there has risen a Resistance to this regime of white supremacy, corporate sell outs, misogyny, homophobia, climate change and this Resistance will not stop until those who will cause us harm has been removed from office. If you don't see this, then I'm sorry but you're not paying attention.

The day I saw it was also the one year anniversary of actress Carrie Fisher's passing. It's hard to believe that it's already been a year, yet watching the movie it felt like she was still here with us. The universe is still reeling from her untimely death, and fans from all over the world miss out beloved princess Lea.

STAR WARS: THE LAST JEDI is currently playing in theaters nationwide, including the Century Theaters here in the Bay Area. To view showtimes, visit their website at http://cinemark.com.

Thanks for reading, and enjoy the show!
Posted by Philip Castor at 3:04 PM