I've been  busy digging through the independent film world for something that would catch my eye. Luckily, there's a lot of activity here in the underground, which produces some unique and interesting works of art. Take for instance filmmaker Brian K. Williams' SPACE BABES FROM OUTER SPACE, which both harkens back to the glory days of Mom & Pop video stores and USA Up All Night while showing us where the B-movie sci-fi genre is now. 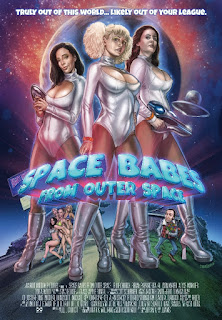 The film's official synopsis: Three babes from a faraway galaxy (Ellie Church, Allison Maier, Alyss Winkler) end up stranded on Earth after a surprise encounter with their mortal enemies, the Scrotes! The babes need sexual energy to refuel their ship and return home. Lucky for them, their newfound friend Charlie (Brian Papandrea) knows just the place to get it — the strip club! Will they harness enough sexual energy to get back home? Or will the Scrotes put another wrinkle in their plans?

Now this is how B-movie films and cult classics should be: FUN!! Good crap, I had so much freaking fun watching this! First off, you have a fantastic cast to bring these characters to life!  Actresses Ellie Church, Allison Maier, Alyss Winkler carry the film and they do a tremendous job here! All three bring humor, toughness, and vulnerability as well as a heavy dose of beauty and out-of-this-world sexiness! These ladies rocked my world and channel their inner Scream Queen, especially Brinke Stevens, Linnea Quigley, and Elizabeth Kaitan. Add actor
Brian Papandrea's character lovable and horny country boy Charlie, and you have a film that's worth your time and attention!

Kudos to director Brian K. Williams, who along with producer Scott Schirmer founded Bandit Motion Pictures in Bloomington, Indiana in 2016. However, this dynamic duo have been part of the Indiana indie film community for a long time. They've workd on other titles like HEADLESS, HARVEST LAKE and PLANK FACE. Williams captures the essence of the independent spirit while forging an active and local film community. His set-ups and compositions capture all the fun and mayhem of the movie, which is what you should always do! I don't know how many times I watch a movie with a cool premise, but the directing is all over the place. I'm now a big fan of Williams and I cannot wait to see his next film, which is called AMAZON HOT BOX.

I bought my Blu-Ray copy on their Bandit Motion Pictures website, and since I'm also a hardcore collector, I had to buy my copy of the film signed by both Williams and Schirmer. The bonus features include the 20 minute feature "The Making of Space Babes", audio commentary with Ellie Church, Allison Maier, and Alyss Winkler, a second audio commentary with Brian K. Williams and Scott Schirmer, and movie trailers for other independently released movies.

SPACE BABES FROM OUTER SPACE is a loving tribute to those awesome happy-go-lucky, feel good B-movie of yesterday!! If you're a fan of SLAVE GIRLS FROM BEYOND INFINITY, HYBRID, and CREEPOZOIDS, then this movie is right up your alley!! This is a future cult classic, so get on the ground floor now because this movie is gonna take off into the stratosphere!! 5 out of 5 stars!! Highly recommended!!


SPACE BABES FROM OUTER SPACE is available on both Blu-Ray and DVD on the Bandit Motion Picture website. To purchase a copy, visit banditmotionpictures.com. The film is also available on Vimeo-On-Demand and Amazon Instant Video.

Thanks for reading, and enjoy the show!
Posted by Philip Castor at 6:35 PM