On the second Sunday of every month, the Niles Essanay Silent Film Museum hosts a Laurel & Hardy Talkie Matinee show, hosted by the Sons of the Desert gang. The museum has been doing this for years, and it was the first show I've attended in a very long time. Because I was there volunteering that Sunday, I was able to check out the LAUREL & HARDY TALKIE MATINEE, with all the films dedicated to "The Boys", Charley Chase, and the Our Gang kids. And there were plenty of laughs to had!! Overall, there were four side splitting Hal Roach produced comedy short to watch!! 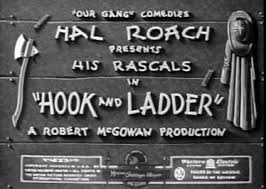 HOOK & LADDER (1932): Featuring the Our Gang kids, we see them set-up their own fire station. But when a real five alarm fire breaks out, the gang springs into action to combat the blaze, in their own hysterical fashion.And things get even more crazy, when they find crates of dynamite!

It's been a long time since I've seen a talkie OUR GANG short. I grew up watching these on TV back when I was a kid, and they're just as funny now as they were then when I was younger! The short was directed by Robert McGowan, produced by Hal Roach Studios, and was released by MGM on August 27, 1932. 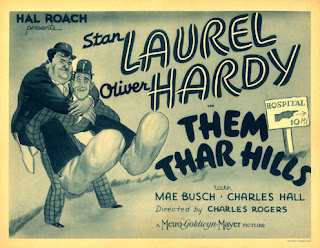 THEM THAR HILLS (1934): Poor ole Ollie! Taking his doctor's advise, he and Stan take a trip into the mountains so that he can recover from his bad case of gout in his foot. However, a gang of bootleggers just dumped their moonshine in the well that the boys sample their 'healthy' mountain water.' from. Then, Mr and Mrs. Hall's car runs out of gas. He leaves his wife there while he heads back to the gas station. When he gets back, he finds his wife plastered, along with the boys! Oopsie!

This is a perfect example of the comedic timing and genius of Laurel & Hardy! This was one of the funniest short films that the duo made! I laughed my butt off! The short was directed by Charley Rogers, produced by Hal Roach Studios, and was released by MGM on July 21, 1934. 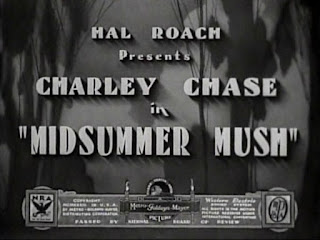 MIDSUMMER MUSH (1933): Starring the great Charley Chase as a Boy Scout leader, he causes a major traffic jam, keeps falling of his bicycle, causes trouble for a traffic cop, and meets the girl of his dreams in the form of Betty (Betty Mack). He leads her and her father, and his scouts to the camp site, where even more crazy hijinks continues to plague our poor friend Charley!

This was the very first talkie Charley Chase short I have ever seen, and I loved it! The repeat gag with him falling into the lake over and over again was funny as hell! It's a real shame that Chase never became as big as his peers. Personal demons kept him from becoming a household name, and unfortunately, he's best known for his small role in THE SONS OF THE DESERT with Laurel and Hardy. But we still have his shorts to watch, and because of that, he will live on forever! The short was directed by Charley Chase (as Charles Parrott), produced by Hal Roach Studios, and was released by MGM on October 21, 1933. 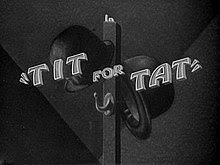 TIT FOR TAT (1935): Picking up after the events in THEM THAR HILLS, Stan and Ollie encounter their old nemesis Mr. Hall, whose grocery shop is next door to their home appliances store. Unable to let bygones be bygones, a war breaks out between the two camps. Will those tit-for-tat battles ever end?

This was new to me, and it was quite the surprise! Here's another example of continuity that bridges shorts together to create a universe with the Hal Roach Studio. This was really neat to see! Yeah, I sound like a dork, but who cares! Anyway, I laughed my ass off again, but that shouldn't come as no surprise. It's Laurel and Hardy people! You're supposed to laugh your ass off! But that fact that a short that was made 84 years ago says something. These guys are comic legends, and this one of the many reasons why they are legends! The short was again directed by Charley Rogers, produced by Hal Roach Studios, and was released by MGM on January 5, 1935.

Well, there you have it folks! Another fun-filled cinematic adventure here in Niles!! And I can't wait to come back for more silent film and talkie comedies! The museum is open for tours every weekend from 12pm-4pm and every Saturday night there's a silent film show starting at 7:30 (doors open at 7pm). So if you would like to learn more about the Niles Essanay Silent Film Museum, becoming a member, to view their film schedule, visit www.nilesfilmmuseum.org.