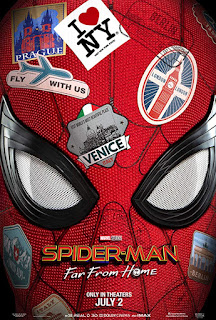 When I first saw SPIDER-MAN: HOMECOMING two years ago, I thought to myself, "Finally!! They did it right!! We finally have the Spider-Man we the audience have been waiting for!!" And it was glorious!! Unfortunately, the bad part was that we were gonna have to wait a while for the sequel, since the AVENGERS films would be released first. After the emotional rollercoaster that was AVENGERS: ENDGAME, I finally got to see the final chapter of the now called "The Infinity Saga" that first began with IRON MAN back in 2008. And needless to say, SPIDER-MAN: FAR FROM HOME lives up to the hype and is a fitting epilogue to this first epic conclusion of the Marvel Cinematic Universe!

The film's official synopsis: Our friendly neighborhood Super Hero decides to join his best friends Ned, MJ, and the rest of the gang on a European vacation. However, Peter's plan to leave super heroics behind for a few weeks are quickly scrapped when he begrudgingly agrees to help Nick Fury uncover the mystery of several elemental creature attacks, creating havoc across the continent.

SPIDER-MAN: FAR FROM HOME is a high intense, action packed, hilariously funny, ultimate superhero comic book movie sequel you've been waiting for! It's also a very satisfying and logical conclusion to the "The Infinity Saga" and sets up the next phase of the MCU perfectly!! So grab the family and go see the last MCU film of the year on the big screen!! 5 out of stars!! Highly recommended!!


SPIDER-MAN: FAR FROM HOME is currently playing in theaters in 2D, 3D, and IMAX nationwide, including at the Cinelux Theaters here in the Bay Area. To view showtimes, visit their website at www.cineluxtheatres.com.

Thanks for reading, and enjoy the show!
Posted by Philip Castor at 7:55 PM