Was I one of the few who enjoyed PROMETHEUS? When I first saw the film back in 2012, I thought it was, "a visually stunning and haunting film that takes the ALIEN mythology that Ridley Scott created decades ago and transforms it into something totally new and different! It is a film that really explores our questions and fears, and at the same time gives us some chills to terrify us with."I still stand by that statement five years later. Now, Scott has returned to theaters with the visually stunning ALIEN: COVENANT, a sequel that links the previously mentioned PROMETHEUS prequel to the ALIEN saga. 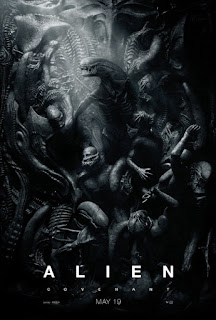 The film's official synopsis: The crew of the colony ship Covenant, bound for a remote planet on the far side of the galaxy, discovers what they think is an uncharted paradise, but is actually a dark, dangerous world. When they uncover a threat beyond their imagination, they must attempt a harrowing escape.

Filmmaker Ridley Scott returns to the director's chair had proves, without a shadow of doubt, that he is one of the greatest directors of all time. The film is absolutely gorgeous to look at. His set-ups, his compositions, his panning and tracking, his attention to detail, it contains all of his cinematic trademarks. The story, however, felt a little flat.

Now I try to make my reviews spoiler free as possible. This one might be a little difficult to explain fully since there might be some of you out there that haven't seen the film yet. So I'm gonna make this a generic as possible.

The first problem I had with the movie was the story itself. Picking up about 10 years after the events seen in PROMETHEUS, here we have a colony ship en route to a planet that is similar to Earth, but decide to alter their course to investigate a planet that is similar as well. Really? That's a bunch of crap. Why would you do that, especially if you have thousands of people asleep on board and the planet you're going to has been researched for years? No person would do that. Well, except these people.

The other problem I had were the characters themselves. With the exception of Michael Fassbender's characters David and Walter, I didn't care about them. Not one person did I think to myself, "Oh I really like this man or woman." Nope, didn't give two shits about any of them. Again, Fassbender's dual roles were riveting! He was the only saving grace in the film.

It felt really rushed and didn't really take it's time to explain what was going on. Also, we were teased about what happened in the 10 years between PROMETHEUS and this film and, I have to say, it was very disappointing about what happened to Noomi Rapace's Elizabeth Shaw. I thought it was a cheat and wished the filmmakers would have come up with a better fate for her.

Character were boring, the plot lacked depth, the special effects weren't all that spectacular, everything was a step down from the previous film.

ALIEN: COVENANT is a sub par sequel as well as entry into the ALIEN franchise! I expected more from Ridley Scott and I was severely let down. How can he make a beautiful looking movie and not deliver anything else? Seriously, I have no freaking clue how this is possible! And the trailer looked so damn cool too! Once again I was tricked by Hollywood! 2 out of 5 stars! Maybe worth it as a rental when it comes out!


ALIEN: COVENANT is playing in theaters nationwide. Check your local listings to see if it's playing at a theater near you.

Thanks for reading, and enjoy the show!
Posted by Philip Castor at 9:15 PM No comments:

Marvel Studios took a gamble on GUARDIANS OF THE GALAXY back in 2014. Sure, the trailer looked awesome, but it was based on a relatively obscure and not-too-well-known comic book. Comic geeks like me knew of its existence, but I was concerned that it was going to be a boxoffice bomb, even though Troma alumni James Gunn wrote and directed the film. Now I've been a fan of Gunn's since TROMEO & JULIET and he's gone on to become a big Hollywood big shot. But when the film became a huge gigantic hit, it took Gunn to a whole new level of stardom. Naturally, it was announced that he would be returning to do the sequel, I think fans breathed a collective sigh of relief. Three years later, I'm sitting in my local theater to watch GUARDIANS OF THE GALAXY VOL. 2 and I left feeling like I saw the best Marvel film ever! 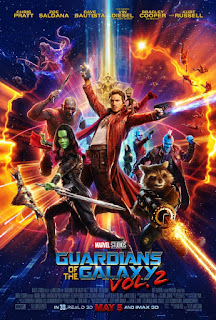 The film's official synopsis: Set to the backdrop of 'Awesome Mixtape #2,' Marvel's Guardians of the Galaxy Vol. 2 continues the team's adventures as they traverse the outer reaches of the cosmos. The Guardians must fight to keep their new found family together as they unravel the mysteries of Peter Quill's true parentage. Old foes become new allies and fan-favorite characters from the classic comics will come to our heroes' aid as the Marvel cinematic universe continues to expand.

Gunn takes these band of misfits and cranks the adventures up to 11! All the while expanding of the characters themselves as well. Chris Pratt's Peter Quill aka Starlord, who lost his mother to cancer as a child, finally meets his father Ego, portrayed by Hollywood legend Kurt Russell. We see the bonding between a father and his son, which is quite touching. Speaking of families, Gamora (Zoe Saldana) and her sister Nebula (Karen Gillan) try to work out their differences if they are to destroy their father Thanos. Drax (Dave Bautista) befriends Mantis (Pom Klementieff) and Rocket (voiced by Bradley Cooper) gets to know Peter's old friend and surrogate father figure Yondu (Michael Rooker). What Gunn has done with this film is focus on the theme of family, whether it's blood or friends that are your family. It's really refreshing to see this in a Marvel movie, where it's mostly just popcorn action and adventure fluff.

So now let's talk about the one character that has captured America's heart. The one Marvel character that has now become the most popular character in the MCU. Yes my friend's I'm talking about Baby Groot. OMG he's soooooooooooo freaking cute!! I want a Groot for myself!! Eeeeeeeeeeeeeekkk!!!! OK, now that I've gotten that out of my system, let's continue, shall we?

The special effects were awesome, the 3D conversion was excellent and heightened the movie going experience and had solid character development, great story, plenty of laughs and introduced some interesting new character while setting up future MCU storylines. And yes, there are five post credit scenes so stay and watch them all, especially the scene with Hollywood heavyweight Sylvester Stallone, which got me very excited to see what's to come.

GUARDIANS OF THE GALAXY VOL. 2 has the distinction of being better than the first film and really entertains the hell out of you!! Seriously, if go see this movie and you're not happy afterwards, then I would suggest seeing a shrink. This was a blast to watch from beginning to end! And if it's playing in 3D, then see that on the big screen! 5 out of 5 stars!! Highly recommended!!


GUARDIANS OF THE GALAXY VOL. 2 is playing in both 2D and 3D in theaters nationwide. Check your local listings to see if it's playing at a theater near you.

Thanks for reading, and enjoy the show!
Posted by Philip Castor at 8:34 PM No comments: