So I was thinking that it would be fun to keep the chick flick theme going for one more blog. Last week I reviewed the film BRIDESMAIDS, which I mentioned that it was hilarious. So tonight's film plays along the same lines (a wedding theme) but with a very funny, Vietnamese twist. The film I saw tonight is called BATTLE OF THE BRIDES (CO DAI DAU CHEIN) and I went in without any idea of what the film was about, and I came out of the theater smiling from ear to ear. 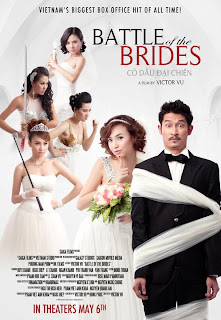 Huy Khank portrays Thai, a selfish, womanizing playboy who has FIVE relationships going on simultaneously. In the end he chooses good girl Linh (Ngoc Deip) to be his bride. However the wedding ceremony is interrupted when all FOUR of his ex-girlfriends show up in wedding gowns! The exes Quyen (Le Khanh), Mai Chau (Van Trang), Phuong (Phi Thanh Van), and Trang (Ngan Khanh) are not too happy with Thai, as they chase him across town, armed to the teeth and threatening to kill him. During the chase Thai himself explains to the audience how this catastrophic mess happened in the first place. The film's climax was fantastic, featuring a surprise twist ending that was totally unexpected.

What a fantastic film that came out of left field and it really took me by surprise. Huy Knanh performance as Thai was just hysterical, blending comedic timing with that playboy swagger perfectly. Le Khanh's performance as the somewhat unstable doctor Quyen enforces the lesson of never dating a woman who knows how to do amputees, while the same lesson can be applied to Ngan Knanh's portrayal of master chef Trang, who loves throwing very sharp kitchen items to get her point across. Phi Thanh Van is perfect as the cunning, deceiving, up-and-coming actress Phuong, who pulls a fast one on Thai. It was funny to watch Van Trabg's Mai ,who's a flight attendant by day and likes to break into Thai's place and look for clues to see if he's cheating on her at night. And last, but certainly not least, Ngoc Diep's portrayal of Linh was magnificent! Displaying such beauty, love and devotion that it made me want to marry her!

One must also give praise to the film's director Victor Vu, who carefully crafted one of the best romantic comedies in recent cinematic history. Vu's directing was so simple, and yet very effective. His use of colors was very interesting as well. Thai's apartment is decorated with the color brown, from his couches and tables to his front door. Whenever Linh appears in her scenes, the color pallet is showcased in its full glory: the green trees and lawns along with her paintings are so vibrant, her pure white dress and her red flower that dances in her long, light brown hair. Basically Linh just shines throughout the film. Vu brings out the best in his cast, as they bring some amazing characters to life on the big screen.

According to the film's poster, BATTLE OF THE BRIDES has become Vietnam's biggest box office hit of all time, and it's very easy to see way. This film is a shining example of what a romantic comedy should be, and American film companies should take careful notes on this film. I cannot overstate just how great this film is, so stop whatever it is that you're doing, and go see it right now. Ladies, tell you men that I said for them to take you! And then ask them to marry you, before they go ask one of their other girlfriends by mistake.

BATTLE OF THE BRIDES is only playing for one more day at the Camera Cinema 12 in Downtown San Jose!! To view showtimes visit their website at http://www.cameracinemas.com/index.shtml

Thanks for reading, and enjoy the show!
Posted by Philip Castor at 11:14 PM