In the past couple of decades, product placements have pretty much dominated Hollywood, whether it's on television or up on the big screen. Quite frankly, it's now become grotesque and cliched. Overly-priced actors and actresses have now become overly-priced prostitutes, hawking items from cars and designer clothes to hotels and cologne. But is it possible to make a film nowadays without product placement? And can small independent filmmakers maintain their artistic vision without being labeled as a sellout? These questions, and so many others, are explored in what perhaps, maybe, one of the best documentaries I've seen so far this year. Once again, documentarian filmmaker Morgan Spurlock returns to the big screen with his best film yet, POM WONDERFUL PRESENTS: THE GREATEST MOVIE EVER SOLD. 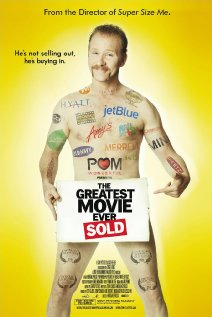 Spurlock made a name for himself with his first film, 2004's SUPERSIZE ME, a documentary that focused on him eating nothing but McDonald's for an entire month, and the effects that it had on him. The film garnered him with an Academy Award nomination for Best Documentary Feature. He followed that film up with 2008's WHERE IN THE WORLD IS OSAMA BIN LADEN which, unfortunately, didn't do too well at the box office. Now with this fantastic, funny, and enlightening film, Spurlock returns to show us that he is a talented documentarian filmmaker, ranking with his peers, such as Errol Morris, Michael Moore, Barbara Kopple, and Robert Epstein. POM WONDERFUL PRESENTS: THE GREATEST MOVIE EVER SOLD is a solid, hilarious, entertaining, yet educational documentary about the ups and downs of branding, product placements, and advertising in Hollywood films. Highly recommended!

POM WONDERFUL PRESENTS: THE GREATEST MOVIE EVER SOLD is currently playing nationwide, including at the Camera Cinemas. To see showtimes, visit http://www.cameracinemas.com/index.shtml

Thanks for reading, and enjoy the show!
Posted by Philip Castor at 12:03 AM