It's that time of the month again, when at the Niles Essanay Silent Film Museum, things gets a little crazy. That's because tonight's Comedy Shorts Night at the museum. As with tradition, I stopped over at Bronco Billy's Pizza Palace to have some delicious pizza and say hi to my good friend Heather, then back to the Edison Theatre for some classic silent comedy. Once again Frederick Hodges provided the music for tonight's show.

﻿﻿﻿ The first short of the night was THE RINK, starring the famous Charlie Chaplin. Chaplin works as a waiter in a restaurant, where some humorous shenanigans take place. Later on his lunch break, the little Tramp heads for the rink to do some rollerskating, which really must be seen to believe. Chaplin is just amazing on rollerskates, and are some of the funniest scenes of the film. Both Edna Purviance and Eddie Campbell appear in the film as well.

The film was released by the Mutual Film Company on December 4, 1916. Also known as Rolling Around, the film is yet another example of Chaplin's comedic genius, and it also adds to his rich legacy. One of my all-time favorites, this is a short that should be required viewing for all Chaplin fans. Very, very funny film!!

The second film up was MOVIE NIGHT, starring funnyman Charley Chase. Chase takes his family out for their weekly movie night, only to have one disaster after another happen to poor 'ol Charley. Look for Spec O'Donnell as Charley's brother-in-law in the film. O'Donnell appeared in numerous Hal Roach films.

The film was produced by Hal Roach Studios and released in theaters on May 11, 1929. This was the last silent film that Charley Chase made. By this time, sound films or "talkies" were now being made. He made some remarkable appearances in talkies, especially in Laurel and Hardy's classic SONS OF THE DESERT. Despite this, he never was offered any more work in features. He continued to make shorts as well as directed some of the Three Stooges' early movies. He passed away on June 14, 1940, barley 47 years old. As a result, the name Charley Chase faded into obscurity. However, our friends at Kino International released two volumes of Chase's funniest films on DVD. Now everyone can enjoy the comedic legacy of the great Charley Chase.

After the intermission, the third film of the night shown was THE GOAT, starring the great Buster Keaton. Keaton is hounded by the police when he is mistakenly photographed for escaped murderer "Dead Shot" Dan. Along the way he helps out and befriends the lovely Virginia Fox, who's father is none other than police chief.

The film was released on May 15, 1921, and showcases Keaton's physical talents, which are amazing. Keaton started off in vaudeville with his family before moving on to making films. His real name is Joe Keaton, named after his father. When Buster was a small child, he fell down a flight of stairs. When he reached the bottom, he stood up, dusted himself off, and the then walked away. Standing there watching this was his parents, as well as the great magician Harry Houdini, who said to his parents, "That's some buster your son just took." The name stuck and he was to be "Buster" Keaton for the rest of his life, becoming a legend in the silent film world. 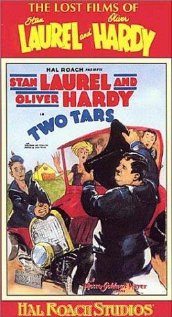 The last film of the night starred Stan Laurel and Oliver Hardy. In their film TWO TARS (which is another word for sailor), the boys play sailors who rent a car to pick up their dates (Thelma Hill and Ruby Blaine) and take them on a nice drive. However they get caught up in a severe traffic jam with a bunch of ill-tempered motorists. Soon our boys are causing havoc to the other motorists and some fun mayhem ensues. Also look for special appearances by Edgar Kennedy, Charlie Hall, and Henry Bernard.

Originally entitled Two Tough Tars during production, the film was produced by the famous Hal Roach Studios, and distributed by MGM on November 3, 1928. The film was written by Leo McCarey, who directed several of Charley Chase's films, and was directed by James Parrot, who just also happens to be Charley Chase's younger brother!

Another sold out crowd attended the show tonight! People just love coming to the museum for their Saturday night shows. To learn more about the Niles Essanay Silent Film Museum, how to become a member, and to view their film schedule, visit their website at http://www.nilesfilmmuseum.org/

Thanks for reading, and enjoy the show!
Posted by Philip Castor at 10:11 AM