Just looking at the film's poster makes me laugh. Five bridesmaids looking tough and sexy in the tight, form-fitting, frilly pink dresses, while the the bride radiates attitude, with a look that screams, "touch me and I'm gonna kick your ass!" Yes, it's one of my favorite posters so far this year. And it's also one of my favorite comedies so far this year as well. With the most outrageous comedic scenes ever captured on film, BRIDESMAIDS is, without a shadow of a doubt, the best anti-chick flick I have ever seen! 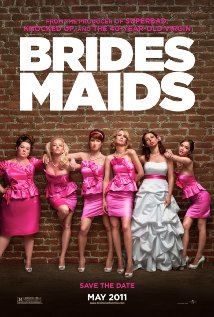 The film stars Saturday Night Live cast member Kristen Wiig as Annie, who's life has become an absolute mess. However, when her best friend Lillian (former SNL cast member Mya Rudolph) becomes engaged, she must pull herself together and bluff her way through the job as her friend's maid of honor. However, Annie is flat broke and cannot afford anything for the wedding, even her dress. Things get worse when Lillian's new friend Helen (Rose Byrne) attempts to upstage Annie to become Lillian's maid of honor. Throw in a motley crew of bridesmaids (Melissa McCarthy, Wendi McLendon-Covey, and Ellie Kemper) and you have one helluva trainwreck just waiting to happen.

The entire cast is hilarious! I could go into detail on how all these ladies are funny, but then I would risk exposing all the funny, gross out, unbeliebable, touching, hysterical scenes of the film. Best if I don't go into detail, but I will see say this: when you see Lillian squating down and taking a crap in the middle of a busy street in her bridal gown, you know that you're in for a good time.

Kristen Wiig's performance of Annie really is stupendious. She's funny, and yet sympathetic. We all at one point in our lives hit rock bottom, and sometimes it feel s like we can't get out of that hole. But Annie transitions throughout the film, making the mistakes so she can correct them later. Along the way, she realizes that life does have its fair share of disappointments, but that doesn't mean that you can't take chances and start living again. I loved Wiig's performance in this film. Also, major thumbs up for the rest of our ladies! Mya is perfect as Wigg's best friend, Byrne's Helen is a snooty, rich bitch that we all love to hate, and McCarthy's Megan is so out there that I can't even think of an adjective to desribe her!

Overall BRIDESMAIDS is simply one of the best comedies that is made for women, but fellas, you will get a kick out of this film too. The film was produced by Judd Aptow, the same man who brought us KNOCKED UP, THE 40 YEAR-OLD VIRGIN, and FORGETTING SARAH MARSHALL. Aptow brings that kind of over the top humor over to the ladies, and they take it and run with it! Look, just do all yourselves a favor, and go see this film. Afterwards ladies, make sure your man isn't tramatized of getting married. Remind him that it's only a movie. Then tell him you want to see the movie again.

BRIDESMAIDS is currently playing nationwide, including at the Camera Cinemas here in San Jose. To view showtimes, visit http://www.cameracinemas.com/index.shtml

Thanks for reading, and enjoy the show!
Posted by Philip Castor at 8:11 PM