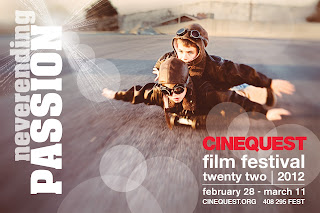 It's that most wonderful time of the year again! And no I'm not talking about Christmas. I'm talking about the Cinequest Film Festival, which is held every year in Downtown San Jose at the Camera Cinema 12, The San Jose Rep Theatre, and the majestic California Theatre movie palace. Started in 1990 by co-founders Halfdan Hussey and Kathleen Powell, the festival has grown to epic proportions over the years, attracting new and established filmmakers while simultaneously providing a home for up and coming directors as well as pushing the boundaries with technology and media. With "Neverending Passion" as their theme for this year, Cinequest will showcase their passion with, "great films, embracing new ideas and innovations, and discover exciting new voices and experiences."

Now in its 22 year, the festival will be showing over 180 films (16 world premiers) and a plethora of movie shorts programs. For thirteen days, movie lovers will be able to experience the time of their lives as they witness the very best in independent, foreign, and documentary films as well as partake in informative lectures, media events, and few surprises along the way.

The festivities begin on February 28th with the opening night film THE LADY, the latest film from legendary director Luc Besson, whose films LE FEMME NIKITA, LEON: THE PROFESSIONAL, THE FIFTH ELEMENT, and ARTHUR AND THE INVISIBLES have entertained audiences world wide. With his new film, Besson tells the story of Aung San Suu Kyi (Michelle Yeoth from CROUCHING TIGER, HIDDEN DRAGON and MEMOIRS OF A GEISHA) as she becomes the core of Burma's democracy movement. A powerful and gripping story about love, sacrifice and the power to change the world.

Other highlights at this year's festival include the unveiling of Cinequest Picture The Possibilities (PTP), which is a "worldwide transformative leadership movement" that encourages local youths from all over the world to create and make their films that "express their visions of a better tomorrow that will engage and inspire global leaders to create change, at first locally, but then on a wider, grander scale." On Friday, March 2nd at the San Jose Rep Theatre there is the Day Of Empowering Voice that will include top leaders from both Silicon Valley and Hollywood to discuss and engage in discussions on empowering youth voices around the world and the "synergy occurring between technology, social media, art, and the digital youth generation." Sunday, March 4 from 5-7pm is the Maverick Spirit Awards, but this year the festival honors award-winning chefs Michael Mina and  Michael Miller (from the Silicon Valley Capital Club).

Also receiving the Maverick Spirit Award is director Terrence Davies, whose latest work THE DEEP BLUE SEA is the festival's closing night film. Based on the Terence Rattigan play of the same name, the film stars Oscar winner Rachel Weiz as Hester Collyer, who is married to British Judge William Collyer (Simon Russell Beale) but soon finds herself in a very steamy and self-destructive love affair with a Royal Air Force pilot named Freddie Page (portrayed by Tom Hiddleston). Both the opening and closing night films will have a lavish after parties that both movie fans and filmmakers can enjoy together.

I have been attending the Cinequest Film Festival for going on eight years now. And with each passing year the festival gets bigger and better, without losing its vision. To me, the festival plays a very important part in my community: it encourages local filmmakers that it is possible to go out and make your film, to capture your voice and have it shown to audiences. The festival is responsible for me in becoming a filmmaker and a film historian. Cinequest continues to be both a source inspiration and enlightenment. If you are an inspiring filmmaker, a film lover, or just an occasional theater goer, the Cinequest Film Festival as an event that you must attend and after it's all over, you cannot wait to come back next year, and the year after that. So mark this event on you calender and come out to San Jose and witness the Cinequest Film Festival, where the neverending passion for cinema continues.


The Cinequest 22 Film Festival is once again held from February 28-March 11, 2012. To view the festival's film schedule and to purchase tickets and passes, visit their website at www.cinequest.org.

Thanks for reading, and enjoy the show!
Posted by Philip Castor at 10:45 PM