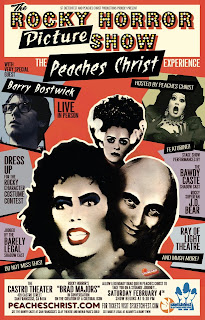 This past Saturday night I once again made a trip out to the Castro Theatre in beautiful San Francisco to witness history in the making! I along with a bunch of my friends went to see THE ROCKY HORROR PICTURE SHOW: THE PEACHES CHRIST EXPERIENCE with Brad Majors himself Barry Bostwick live in person! Tonight also marked the return of the film to the theatre, which hasn't been shown here in over 20 years! Plus as an added bonus my friends from Barely Legal were going to be judging the costume contest. Yes friends, it was indeed a night to remember!

So my friends and I were let into the theatre at 9pm and were greeted by our friends Sandra Dee, Drea Storey, Lizzie Bernard, Christy Robinson, Nate and his wife Bridgid McHavoc from Barely Legal (read my interview with them here) Then we made our way inside the theatre where we found seating in the second row! At exactly 9:30pm the lights dimmed and the pre-show began. Peaches and her "motley friends" Peggy L'Eggs (Riff Raff), PJ Soulless (Brad), Tangyna (Janet), Lady Bear (Magenta), Pristine Condition (Rocky), and Cousin Wonderlette (Columbia) came out and did a rollicking rendition of "Sweet Transvestite" (Peaches' new lyrics were, "I'm just a peach transvestite from San Francisco, California!" Sweet lyrics PC!). After the song Peaches thanked the audience for coming out for the show and told us the night was only beginning.

Up next Peaches introduced us to The Bawdy Caste, a ROCKY shadow-cast who did a fun musical number utilizing their entire cast in the show. But what was really amazing was that, according to Peaches, they came to the Castro to perform this number only because they had to make a mad dash to their midnight show at The Guild in Menlo Park! Thank you for taking out of your very busy schedule to perform at the show TBC!

Peaches then introduced ROCKY superfan J.D. Bear, who along with some other dancers, did a fun lip-sync performance of Meatloaf's classic "Paradise By The Dashboard Light" from his 1977 album Bat Out Of Hell.

The next event up for the night was the incredible and talented Val N Tine from the Ray of Light Theatre, which is THE place to see live performance shows (which included a recent stage production of ROCKY). Val along with Manual Caneri reminded us to "Say it. Don't spray it" meaning no food, or water pistols, or anything of that sort would be allowed during the screening. A funny cautionary and warning, complete will sass and makeup.

Then it was time for the costume contest. The Barely Legal crew had a tough time with this one. There were several great looking costumes to choose from, but in the end it was Ace Allmaras AKA Vernon who won the grand prize! Congrats to you Ace!

Then finally the moment had arrived! Now I'm usually a peaceful and level headed individual; calm, cool, and collective. But when Peaches was about to introduce Barry Bostwick out on stage, I found myself screaming like a little girl at a Justin Bieber concert. But my reaction was nothing compared to her's! As soon as Peaches finished her introduction, out comes Bostwick in his original ROCKY DRAG COSTUME! This was hilarious!! And it shocked and surprised Peaches as well! Soon the entire audience was giving him a standing ovation! People were cheering, laughing, screaming and giving him much respect! The first thing Barry said was, "Just shoot me now!" followed by the best line of the evening, "Why won't you guys let this movie die? I can't take it anymore!" Peaches addressed the audience by saying that backstage Barry didn't look like this and he excused himself to her dressing room. Soon Barry was on the floor of the stage, striking his famous leg stretch from the film! For the first time I saw Peaches speechless! This has never happened before! How unbelievable is that folks?

The interview continued with Peaches asking some fun, interesting and funny questions. Questions like, "You were a fan of the show?" which Barry was hesitate to answer, which made us laugh. Other fun questions like, "You got the part over Steve Martin" to which Barry replied, "Whatever happened to his career?" which again made us laugh hysterically! Barry was hilarious, lively and regaled the audience with funny and interesting stories about the making of the film. Peaches then opened up to audience questions, which were also made me laugh even harder thanks to Barry's responses.

After the interview Peaches was about to lead Barry backstage when another surprise happened before our very eyes! Out from the audience came none other than Luke Perry himself (Dylan from the original 90210 for all you who didn't know that)! Perry is currently playing Brad Majors in the Broadway version of ROCKY and came out to say thanks and gave him much praise for his work in the film. As Peaches said, "I can't believe we have TWO Brad Majors here tonight!" This was a complete surprise! After that, the lights faded, and flickering in the darkness was the greatest midnight cult film of all time. If you have never seen THE ROCKY HORROR PICTURE SHOW, then let me say just this: Where in the hell have you been for the past 35 years? Click on the title to learn more about it and then go see it now! But makes sure you go see it at a midnight show! You'll thank me later.

After every show  I always wonder how Peaches will top this one. After tonight, I don't even know how this can be topped? This was her best show ever! And I've been to quite a few of her shows. The PURPLE RAIN show was amazing, and her SHOWGIRLS event was just astounding, but this show was like being in heaven. Thank you Peaches and thank you Barry for a night that I will never, ever forget!

As I've said before, if you have never attended a Peaches Christ show, then you have not lived my friend. Her shows are the equivalent of having Christmas, Halloween, and the 4th of July all rolled up in an outrageous wig, tight bustier, high heeled shoes and fishnet stockings! Her shows are so popular that they sell out consistently. So the next time I tell you people about an upcoming show of hers, you had better go! And when you do, you'll have the time of you lives! So to keep up with our Cinematic Diva and all her events, check out her website at http://www.peacheschrist.com/. You can also follow her on twitter at https://twitter.com/#%21/PeachesChrist and don't forget visit her Facebook page at www.facebook.com/peacheschrist. Also to view upcoming film events and schedules, visit the Castro Theatre website at http://www.castrotheatre.com/.

Thanks for reading, and enjoy the show!
Posted by Philip Castor at 11:26 PM