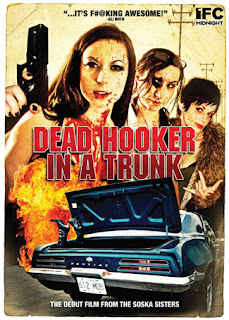 OK folks listen up and listen good! Over on The Midnight Horror Sinema Show, I just finished my review of DEAD HOOKERS IN A TRUNK, the film debut by the Soska twins Jen and Sylvia. Made for just $2,500 and shot in Vancouver, Canada, the Twisted Twins made a kick ass, balls to wall, no holds barred, modern day cult classic. The film was eventually picked up by IFC Films and released it as part of their IFC Midnight line. So if you're looking for a film that is not your typical cup of tea, then this is the film for you! I gave this film five out of five stars, so you know that you're gonna have a fun time watching it if I liked it. So read my review here and have fun watching this film tonight!

Thanks for reading, and enjoy the show!
Posted by Philip Castor at 1:35 PM