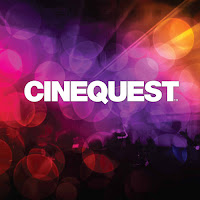 Tonight was a big night for San Jose. Tonight was the big Cinequest Media Launch Party in the Corinthian Grand Ballroom at the San Jose Athletic Club in the heart of Downtown San Jose!

Started in 1990 by co-founders Halfdan Hussey and Kathleen Powell, the Cinequest Film Festival has grown to epic proportions over the years, bring new visions and voices from up and coming filmmakers while bringing new technology and films to the masses. Now in its 22 year, the festival shows no signs of slowing down.

Tonight was also special because it marked my return to Cinequest, and it will be my first time as a film critic. I also ran into my very good friend Jason Wiener, who has a film blog called Jason Watches Movies. I also ran into filmmaker Kathryn Soler (whose film THE ART OF TRAVEL was shown at the festival back in 2008) and to see other friends like Cheri Hughes Thomas, Melanie Fosty, and Christopher J. Garcia, just to name a few.

Cinequest Publicist Brittany Welby welcomed and thanked us for attending this event and introduced Hussey up to reveal this year's theme for the festival. Passion will be the theme and then we were all shown a great video with  Hussey telling us how Cinequest has reached out on a global scale to influence the idea that YOU can go out a create your film and have it been seen by people, who will then in turn become transformed by your film. A great message for all future filmmakers!


The Cinequest Film Festival Twenty-Two will be held from February 28 - March 11, 2012. Tickets and passes are now available so make sure you get them now because they are already moving fast. To learn more about the festival, film schedules and events, and to buy your passes, visit their website at www.cinequest.org

Thanks for reading, and enjoy the show!
Posted by Philip Castor at 10:00 PM