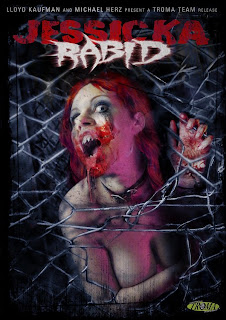 OK so you my have noticed that I've been busy reviewing a lot of cool horror movies on my other film blog The Midnight Horror Sinema Show. The main reason is that there are a plethora of really cool horror films that I must watch and report back to you my fellow creatures of the night. My newest review in on Troma Entertainment's latest DVD release JESSICKA RABID. The film was co-written, co-produced and starred Elske McCain and Trent Hagga. The film was directed by Matthew Reel and was shot on location in Tuscon, Arizona. The film is the perfect blend of underground cinema, home movies, and suff film and is one of the most disturbing film I have seen in a long time. Of course I loved it, so if you're feeling brave tonight, I dare you to watch this film. And be warned, this film is not for the faint of heart. So click here to read about it and see if you can handle this film.

Thanks for reading, and enjoy the show!
Posted by Philip Castor at 2:04 AM