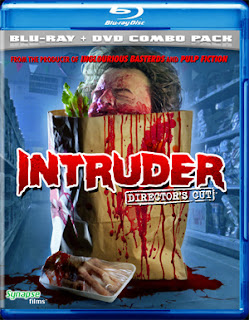 Hello again my faithful gorehounds! Over on my horror film blog THE MIDNIGHT HORROR SINEMA SHOW I just finished my review of Synapse Films' Blu-Ray+DVD combo of the long, lost slasher film classic INTRUDER. The film was directed by Scott Spiegel (co-writer of EVIL DEAD 2) and produced by Lawrence Bender (producer of Quentin Tarantino's films). This was a great horror film, and for those of you out there in the dark who haven't seen this film, I'm telling you all right now that you're missing out! A true lost classic has been restored, so click here and read up on the film! And trust me when I say that you'll never want to go grocery shopping at night ever again!

Thanks for reading, and enjoy the show!
Posted by Philip Castor at 12:24 AM