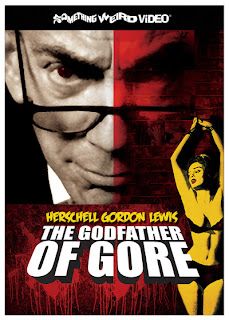 Hello again my faithful readers! I've been pretty busy over on THE MIDNIGHT HORROR SINEMA SHOW. My newest review is on the recently released documentary HERSCHELL GORDON LEWIS: THE GODFATHER OF GORE. The film was directed by Frank Henenlotter, who directed the film FRANKENHOOKER, which was the first film I reviewed for my new film blog. The film chronicles the career of the man who invented the term "Gore" with films like BLOOD FEAST, TWO THOUSAND MANIACS, and COLOR ME BLOOD RED. This was the first feature film release by Something Weird Video, home to some of the world's most insane, craziest, and bizarre films ever made on the face of the Earth! So click here to read my review, then go check out the films of Herschell Gordon Lewis.

Thanks for reading, and enjoy the show!
Posted by Philip Castor at 11:17 PM